How is everyone doing? I hope you all had a wonderful week. I know that I say that every week, but every week it’s true. I really do hope that you have a wonderful week. But even if you didn’t have a great week, there’s always another opportunity around the corner for an amazing week to show up. It’s ok to have bad days, weeks, months, or even years. It’s important that we stand back up and don’t let the bad days tear us down. Focus on the good days. Also remember that sometimes bad days are really just days with a bad moment that seems to ruin the entire day. We can’t control every aspect of our lives but most of the time we can control our attitudes towards it. That’s why I try to have a positive outlook most of the time even if I feel like I’m being swamped in bad stuff. Take a deep breath and try your best to make this a wonderful week. Hopefully the stuff I write here helps you do that. Speaking of which, I should probably talk about what I published this week. You know, follow my wonderful formula. Last Sunday, I published a Weekly Blog talking about Ghost Stories and my disinterest in them. It’s November, but that doesn’t mean the spooks are over! On Tuesday, I posted a Special Weekly Blog talking about Election Day 2018. Hopefully all of you voted if you are of voting age and live in the United States. If not, I hope you saw firsthand how important your vote is and I encourage you to vote next time. Don’t forget about elections in 2019. Local elections are important! On Wednesday, I published a Poem titled “Saving Daylight” which is about the blood sacrifice known as Daylight Savings Time. It gets dark at 5 PM now so you can spend more time inside reading my stuff after the sun goes down. On Friday I published a Writing Prompt piece titled “Hello, Captain” about a lone surviving human and an AI on a journey in an old, colony spaceship across the universe. Give it a read if you are into Science Fiction. Finally, on Saturday, I posted the 11th Chapter to my Pokémon Heart Gold/Soul Silver Fanfiction titled Pokémon HGSS#11: Battle At The Haunted Gym. It’s time for Jonathan to take on the Ghost-Type Gym Leader Morty at the Ecruteak City Gym. Can he take on these spooky Pokémon? You’ll just have to read it to find out.

Now today is a very special day for a lot of reasons. This whole weekend has been important, but today is very important. Today, November 11th, 2018, marks the 100th Anniversary of The Allies of World War I signing an armistice with Germany marking an unofficial end to the war. In the 11th hour of the 11th day of the 11th month, these countries marked an end to “The War to End All Wars.” Obviously this didn’t really end all wars as we know, but the end of World War I is still celebrated in many countries that were Allies during WWI like France and The United Kingdom. Here in the US, we dedicate November 11th as the the end of World War I as well as Veterans Day. (not to be confused with Memorial Day). 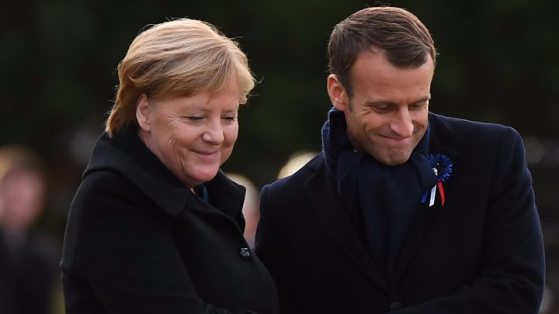 This photo above is one that I found to be very powerful. It is from yesterday’s remembrance ceremony attended by German Chancellor Angela Merkel (Left) and French President Emmanuel Macron (Right). And isn’t that crazy? One Hundred Years Ago, both of the countries these leaders represent just ended a bloody conflict with one another and would only be about 20 years away from starting another world-wide conflict with one another. Now it’s 2018 and these two countries are close friends and allies as well as partners of an entire European Union containing members from both sides of those conflicts. One hundred years sounds like a long time for people living in the internet age where things change at a rapid page, but when thinking about human history, one hundred years is not that long. To add to that, Germany only started reunification in 1990 which is only about 30 years ago.

Now you might be wondering on such an important day if I’m going to talk mostly about Veterans Day which is US-centric or Armistice Day which is more popular overseas or at least in Europe, and the answer is both. I already talked a little about Armistice Day and World War I, but I want to talk a little bit more about it before I move on to talking about Veterans Day. World War I is a period of history which I think gets overshadowed by World War II for a lot of people, unless you are a history buff. When I was in school, World War II was a bigger subject which took up more time than World War I, but World War I also sticks in my mind. I remember when my history teacher taught us about World War I, it was done through a interactive simulation of world history where we split up into groups of three and played out fictional countries based on the real countries involved in World War I. We had leaders and ambassadors which helped make deals with other countries. It was like a very, very simple version of Model UN with our history teacher being God in this scenario. For me it was like a Model UN and Civilization Game all rolled into one and I absolutely loved it. That simulation and the fun I had made World War I really stick in my mind.

Another thing that helped cement my fascination with World War I is a trip I got to take in college. I have mentioned in other blogs that when I was in college I got to take a Study Abroad/Internship trip to Canada. During this trip I got the pleasure to check out the Canadian War Museum in Ottawa, Canada. There you get to walk through this single hallway which snakes its way through history starting with the native, ingenious people of Canada and colonization, all the way up to modern history and Canada’s efforts alongside the UN to be peacekeepers in the world. It’s an amazing museum and if you are in Ottawa, I highly recommend checking it out. Now one of my favorite parts of the museum was the World War I section where you got to walk through a model of a World War I style trench. It was breathtaking and gave me a very real example of what World War I was like for the people fighting the war. Just the feeling of having to wade through the barbed wire between the trenches while both armies are using machine guns and chemical weapons to keep each other at bay. Most battles involved an extreme amount of bloodshed for very little to no advancement on the other armies lines. There was a huge problem with battle wounds, infection, and shell shock. All wrapped up in advancing technology, old battle strategies, and nationalism. I truly can’t imagine the hell those soldiers saw on the battlefield and how they managed to get through it.

That’s why I am so grateful for all the people who have served in the military or are currently serving. I know a lot of people will say something similar today, but I am truly grateful for the people who make the sacrifice and serve in the arm services. That’s something I know that I could never do. I don’t have the physical strength, the determination, or the mental willpower to be in the military. So if you’re a Veteran or are actively serving in the military, I want to thank you for your service. I know here in the US we do not do enough as a society to take care of our veterans and we need to do more to fix that. I know my words are just that, words, but I hope you know that there are many people out there who want nothing but the best for you. I can’t imagine what you’ve been through and I know I could never do what you did. Thank you. Thank you. Thank you. I seriously can’t thank you enough, but I hope this Weekly Blog serves as a reminder that there’s at least one person out there so appreciative of what you’ve done. Seriously, thank you.

I know that was a pretty lengthy Weekly Blog, so I appreciate you all reading through that entire thing. No matter where you are in the world, take today to thank a Veteran or current military personnel. They deserve to know how amazing they are for being a part of the military and for making those sacrifices. Again, it’s something I could never do so that makes me extra appreciative that I don’t have to go through all of that. If you liked this Weekly Blog, feel free to give it a like or leave a comment down below. If you are a Veteran or are currently serving in the military and you are on WordPress, feel free to link your stuff down below on this Weekly Blog. Usually I frown on people trying to use my writing space for their own advertisements, but I want to use this Weekly Blog to boost Veterans here on WordPress. Also if you are doing some kind of charity thing to benefit Veterans or Military Service Members, you can link that down below as well. Anything to help out those wonderful people. If you really liked this Weekly Blog, you might want to spend some time checking out the rest of the website. There are plenty of Weekly Blogs, Poems, Writing Prompt Pieces, and other Creative Writing Pieces here on the website. If you are new or just don’t know where to start, I recommend the most recent pieces which I talked about up above. That’s a good starting point.

Thank you again for your love and support and I hope you have a fantastic week!

Header Photo Credit to The US Department of Veteran Affairs
https://www.va.gov/opa/vetsday/

Photo of Angela Merkel (Left) and Emmanuel Macron comes from The BBC
https://www.bbc.com/news/world-europe-46165903