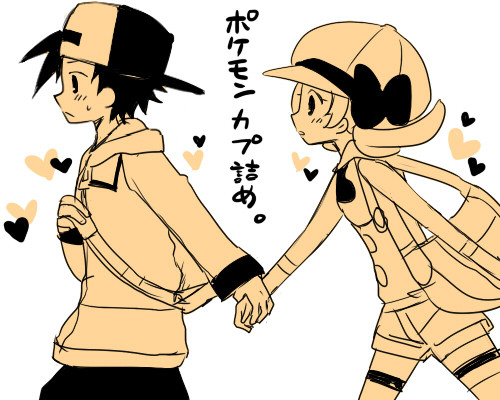 After the events of Team Rocket taking over The Goldenrod City Radio Tower, it took some time for things to get back to normal. Jonathan, Beatrice, and their families stayed in Goldenrod City for a couple of days just in case the police wanted to bring them in again for questions, but this was not necessary. It had seemed that all the Team Rocket members present when the takeover happened, were caught and arrested for the takeover of the tower including the four Team Rocket executives. The police also raided the souvenir shop in Mahogany Town and took all the computers into their custody. It would take months to sort through all the data, but it seemed likely all the key players to the Team Rocket organization had been arrested. There was no sign of the former Team Rocket Boss, Giovanni, but Looker and his team of international police were handling that investigation. Everything seemed pretty wrapped up other than the rumors that a “Red-Haired Boy linked to Team Rocket” was still on the loose. Jonathan and Beatrice both knew that this boy was Silver; although, they had no idea what his connection to Team Rocket truly was. While Jonathan was being questioned by Looker, he mentioned that Silver might be Giovanni’s son, so maybe that was the connection. For now Jonathan kept that information to himself. It was just a rumor and even if it was true, it wasn’t Jonathan’s place to tell that information to anyone. Especially since he didn’t have any proof.

Eventually both Pokémon Professors returned to work and Jonathan and his family returned home alongside Beatrice and her family. Jonathan and Beatrice both spent a couple of weeks hanging out in New Bark Town before deciding what to do next. With Team Rocket out of the way, it seemed like they had a little time to relax. Of course, following the events that took place in Goldenrod City, both sets of parents were very weary to let their children out of their sight for very long, but Jonathan and Beatrice were able to sneak away every now and then to spend some time together.

Things were a bit awkward between Jonathan and Beatrice. In the tower, Jonathan had requested that Beatrice help get hostages out of the building instead of staying to fight Team Rocket directly. Beatrice agreed, but before she left, she gave Jonathan a kiss on the cheek. This baffled and stunned Jonathan at the time, and they still hadn’t talked about it directly. Jonathan and Beatrice had held hands when no one was around, but neither of them really knew what this was. Were they dating? Were they boyfriend and girlfriend? Neither of them truly knew. Along with that, there was also a question of “What next?” hanging over their heads.

“Are you planning on heading to Mahogany Town?” Beatrice asked Jonathan.

They sat in the grass outside Professor Elm’s lab, holding each other’s hand. Beatrice had Marill sitting on her lap which she petted with her other hand.

“I’m not sure,” Jonathan said looking over at her. “I have six of the eight badges already, so it seems silly not to try and get all eight.”

“On the other hand, the main reason I was on this journey was to track down Silver and stop Team Rocket’s plans. We did that in Goldenrod City. Team Rocket is finished.”

“Well Silver is still out there somewhere, right? And I guess Giovanni is out there as well.”

“Yeah Looker and the international police are after both of them. That seems above our pay grade,” Jonathan said with a slight chuckle.

“So was stopping Team Rocket, but you did that.”

“Yeah that’s true,” Jonathan said. “What about you? Do you want to go to Mahogany Town?”

“Jonathan, you’re the Pokémon trainer. You’re the one collecting Gym Badges. My mission was Silver and Team Rocket. You said it yourself. We did all we could do with that.”

“So you’re just going to stay here in Newbark Town, then?”

“My parents had discussed it with me. Before Silver showed up and broke into the place, I was beginning my training in Professor Elm’s lab. My parents want me to work with them. Here.”

“Is that what you want?” Jonathan asked.

“I….I’m not sure,” Beatrice said hanging her head.

There was a brief moment of silence between the two of them. Tension between them started to rise and every second of silence, it got worse and worse.

“Well if I do go to Mahogany Town to take on Gym Leader Pryce, I want you there,” Jonathan said looking over at Beatrice.

Beatrice turned and met his eyes.

“I’m not going to force you to do anything you don’t want to do, but I think we make a very good team. We traveled Johto together. We took on Team Rocket together. It seems dumb not to finish taking on the Pokémon Gyms together,” Jonathan said. “Of course if you want to stay in Newbark Town…”

“I want to come with you,” Beatrice blurted out before Jonathan could finish the sentence.

“Great, we leave tomorrow morning,” Jonathan said with a smile.

“We’ll have to convince our parents its a good idea,” Beatrice said leaning her body into Jonathan’s.

She placed her head on his shoulder and he leaned his head against hers.

The next day both Jonathan and Beatrice talked to their parents about setting off on the journey towards Mahogany Town. There was a lot of back and forth and loud discussion, but eventually they were given permission to set off on the journey once again. They were given explicit instructions to check in at least once a day on their Pokégears and to only focus on the collecting the final Pokémon Gym Badges.

“No more interaction with Team Rocket or any other dangerous people. You see that Red-Haired boy, you stay away from him and call the police. Do you understand?”

“Then I guess you can go,” Jonathan’s Mother sighed.

“Before you go, son, I believe Professor Elm wanted to speak to you about something,” Jonathan’s father said.

“Great, I’ll head right over there. Thanks Mom. Thanks Dad.”

Jonathan gave them each a quick hug and then ran off towards Professor Elm’s lab. Outside stood Beatrice all packed up and ready to go.

“It took some convincing, but my parents said yes,” Beatrice said as Jonathan approached.

“Let me guess, call once a day, no fighting criminals, and no contact with Silver?”

“Twice a day and they said that I have to stay with you,” Beatrice said.

“Oh,” Jonathan began to blush. “Yeah that makes sense. Anyway, I think Professor Elm wanted to speak to us before we headed out.”

They made their way inside and there was Professor Elm with a large pile of books.

“Jonathan! Beatrice! So happy to see you two,” He said as he pushed up his glasses. “So are you two leaving for Mahogany Town?”

“Uh. Yeah we are. How did you know?” Jonathan asked.

“You two just have that look of determination in your eyes. Like your about to set off on an adventure. I noticed that look when you got your first Pokémon, Cyndaquil, but now it burns even brighter within you,” Professor Elm said.

“Anyway, before you go, I wanted to give you something,” Professor Elm turned around and grabbed something off of a side table. “Professor Oak recently traveled to the Kalos region after the incident in Goldenrod City and he picked up something there that might be useful to you.”

“This is an Ampharosite. It is a special stone that allows the Pokémon Ampharos to Mega Evolve. I belive you have raised an Ampharos.”

“Excellent. Well this would allow your Ampharos to Mega Evolve, then. One interesting thing about Ampharos, is when it Mega Evolves, it actually changes its typing to a dual Electric and Dragon Type.”

“It is indeed. I don’t know a ton about Mega Ampharos, but it is possible that while it is in this form, it could use a powerful Dragon-Type move like Dragon Pulse. But that’s just a theory. I guess you’ll have to test it, Jonathan,” Professor Elm said.

“I will,” Jonathan nodded.

“Just not against Gym Leader Pryce. Pryce is an Ice-Type Gym Leader and Ice attacks are super effective against Dragon-Type Pokémon. Wouldn’t want to give yourself a disadvantage like that,” Professor Elm chuckled.

“I will pass on those sentiments to Professor Oak when I see him next. We are both glad you are safe and are proud of you for what you did in Goldenrod City. You helped save lives and take down a criminal syndicate. Very impressive for anyone, especially someone your age,” Professor Elm. “Professor Oak actually mentioned that you two reminded him of two other trainers.”

“Yes those were the trainers. How did you come across those names?”

“Lance mentioned that they teamed up to take down Team Rocket before, when Team Rocket was trying to seize control of Kanto,” Jonathan said.

“That they did. Both of them went on to be The Pokémon League Champion for some time, before they both retired. Blue took over the Pokémon Gym in Viridian City and Red…well Red has been missing for some time.”

“Maybe he is trying to track down Giovanni,” Beatrice suggested.

“That is a possibility,” Professor Elm said before checking his watch. “Oh my gosh. Look at the time. I have already taken up enough of your time. You better head off towards Mahogany Town. You don’t want to leave in the dark.”

“Thank you again, Professor,” Jonathan said with a wave before they left out the door.

Over the next month, Jonathan and Beatrice made their journey from Newbark Town to Mahogany Town. Jonathan continued to train with his Pokémon during this time and challenged trainers along the way. Beatrice did the same training with both her Marill and her Butterfree. They made their way through Cherrygrove City and Violet City, then took the shortcut to Ecruteak City, stopped in and talked to Zuki and the other Eeveelution Sisters about the event in Goldenrod City, and then made their way down the familiar mountain road to Mahogany Town.

Once they got there, Jonathan could really feel the nerves building. The trip back was a lot of fun and he enjoyed being on an adventure again, but now he was nervous to take on the town’s Gym Leader.

“Come on Jonathan, you can do this,” Beatrice said as she picked up on his nervous energy. “You’ve taken on tough Gym Leaders before. You got this.”

Jonathan nodded and they headed off towards the Mahogany Town Gym.

Header Photo Credit to shibooya-blog on tumblr. I believe this is the original poster. If this is your work or if you believe the photo is miscredited. PLEASE contact me and I can fix it immediately! (allen.the.writer@gmail.com)