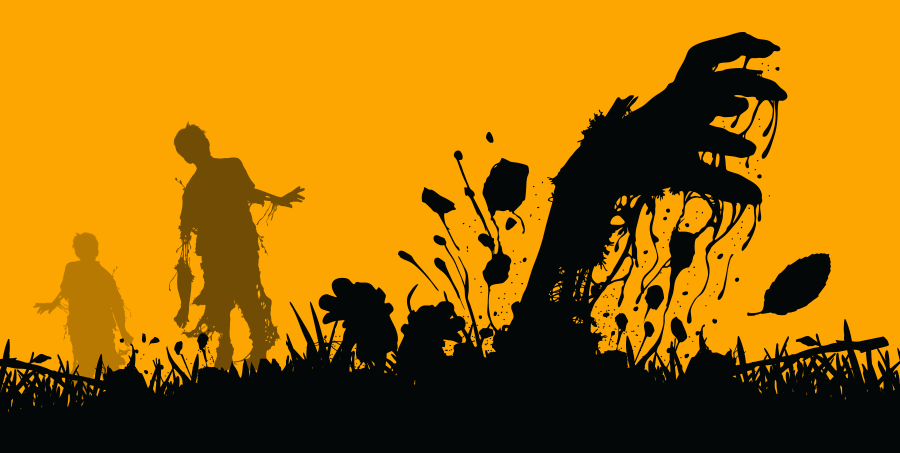 Avery stopped for a second to catch her breath and access the damage done to her ankle. The jump was a little more than she suspected at first, and after she landed, she knew it was a mistake to fall that far. Of course it was either that or the horde of undead corpses following her. A broken ankle was little price to pay to avoid being pull a part by the flesh-eating monsters. She knelt down to look at her ankle brushing her long, blonde hair out of her face. Well it would be blonde if it wasn’t caked in dirt, grime, and blood.

Avery’s ankle had already begun to swell and she wasn’t sure how much damage there actually was. She also couldn’t remember whether or not she was supposed to take off her boot or leave it on. So much for girl scouts teaching her first aid. Too much focus on receiving badges and  not enough time on surviving an undead nightmare.

It almost pained herself to think back that only a few years ago she was in girl scouts. Not the little kid stuff where they made crafts and sold cookies (although she had sold the most boxes three years in a row). She was apart of the older kid stuff involving hiking, canoeing, and exploring planetariums. Now Avery was no longer exploring planetariums. She was a seventeen year old girl who had to grow up way to fast when the world went south.

She decided to leave the boot on as she checked her surroundings. Based of her quick assessment, none of them followed her from the grocery store, or at least she had outran them while worsening her ankle. One good thing about the corpses was that they were slow and not very smart. They usually bunched up and worked off of some kind of pack mentality. If you could outrun them, they weren’t much of a threat.

Avery looked down at her ankle. This would definitely prohibit how fast she could run. This would impact how much progress she could make today. Plus the sun was setting letting her know that she needed to find some kind of shelter to wait out the night.

She pulled her pack onto her back. There was a soft clank of canned food banging into each other.

A whole day of scoping out a two-story market and figuring out how many walking corpses were down there. Her plan was so simple. She’d just slip in, get as much as possible, and get right out before they could gang up on her. Unfortunately, Avery underestimated their numbers. She was almost immediately surrounded by the creatures. She was only able to escape by climbing to the second floor and jumping from a fire escape.

She quickly hobbled away on her ankle to a vacant alleyway with only a few cans of cat food and some toiletries. Days like today reminder her that early on, eating cat food was beneath her. Nowadays, that was the only thing she could find. On bad days, she’d be lucky to find anything to eat.

Avery peeked her head out between the two buildings and looked around. The sun was starting to set, but it still gave her enough light to see that group of walking corpses had finally caught up to her. She didn’t know exactly how many there were, but she estimated that there was probably somewhere between twenty and thirty of them. All wandering around slowly like a slow moving flood. A flood with dead eyes and a hunger for human flesh.

She knelt down with a wince of pain. Then she checked her ammo supply in the one handgun she had. Only five bullets. Her last fiver bullets. Guns are everywhere. You can find guns all over the place. Bullets; however, were scarce.

Killing all of them wasn’t an option and running from them didn’t seem feasible. As soon as the sun set, she’d be at a major disadvantage. Her night vision wasn’t the best and they weren’t slowed down by darkness. Avery wasn’t sure if the corpses could even see. She theorized that the corpses were better at smelling or hearing than they were at seeing.

“Please God, don’t fail me know,” Avery muttered to herself.

It was something between a prayer and curse.

Avery reinserted the clip into the handgun at is based and peeked her head around the corner again. This time one of the corpses noticed her and started making its way towards her. It let out a long moan that sounded like a person talking a mouth full of wet cement. The other corpses apparently knew that the growl was the equivalent of the dinner bell. They turned their heads towards the first one and then started moving towards Avery’s location. A slow flood of death approaching Avery.

Avery knew she couldn’t stay here much longer, so she stepped out of the alley and pointed her gun at the closest undead monster. She pulled the trigger and the bullet grazed the right side of its face. It stumbled forward for a bit and then continued forward almost unfazed by the bullet. She shot again and this time it blew its brains out and the corpse fell. Only three bullets left and she couldn’t make any more mistakes like wasting bullets.

The walking corpses grew closer as she pointed her handgun at another one. This corpse seemed to have been a middle-aged woman before dying and coming back. Avery tried to remember the ones she saw along the way. At first she tried to make up stories about their lives before the Apocalypse. It was a coping mechanism for her. Ultimately this just led to more nightmares. Now Avery tried to forget faces as fast as she could.

She pointed the handgun again and pulled the trigger. This time the shot landed between her – its – eyes. Avery learned pretty early on that no matter how much you destroyed the body, they would keep on coming until you destroyed the brain. That was the key.

Avery decided she’d that this moment was as good as ever to try to run. The corpses were getting closer and her two remaining bullets wouldn’t put a dent in their numbers or slow them down. So Avery turn and ran. Well, not as much ran, but hobbled quickly. With every step, she felt sharp pain shoot up her leg. She winced, but she had to keep going.

From above, it might have looked comical like a slow car chase. One person liming along barely faster than the mob of slowly moving corpses behind her. However, this was not a laughing matter for Avery. She needed to find shelter and fast. She couldn’t keep up this pace for long and she would eventually run out of energy, unlike the corpses.

She continued down the main road where she had the best view of the buildings. She scanned them looking for anywhere she could hide. There was a vegan restaurant, an auto repair shop, and several other small business abandoned after the corpses displaced the human population and cities like this one became deathtraps. Normally Avery would have avoided these areas, but the need of supplies outweighed those concerns. All of these places would have seemed good at first, but Avery doubted she could reinforce anything fast enough to keep the corpses at bay. She needed a place with some natural reinforcement.

Avery was startled to hear another’s voice. There were some times she would go weeks without hearing another person.

Avery turned to see a man standing in the doorway of what looked like an abandoned shoe store. She stood there for a second just staring at the man.

She turned to look back at the corpses walking towards her. She knew that she couldn’t trust this guy. People never did things for the sake of it. They always had an agenda.

Avery looked back at the corpses again. She felt the handgun in her hands. Two bullets left.

She let out a sigh and then started to hobble towards the shoe store and the strange man. Once she got close enough, the man reached out and helped her into the building.

“Run through the store to the back door. Head to the building across the street. It’s secure. Do you understand?” The man asked.

“Then go,” The man gave a little shove.

Avery started hobbling towards the back of the store, while the man watched the front door. He pulled a machete from his belt. He swung it the blade bringing it down into the lead corpse’s head and then kicked it in the stomach. It fell back and knocked over two of the corpses behind it. He then closed the door to the shoe shop and pushed a shoe stand in front of the door in an effort to slow them down if they managed to break through the glass doors.

Avery continued to run, but didn’t get that far in front of the man. She hobbled as fast as she could, but the man was quicker with two fully healed ankles. He was able to catch up to Avery and lead her through the back door. There was a smashing of glass, but they were both outside already. The man lead Avery through an alleyway that lead to an apartment building.

He opened the door and Avery stepped inside. Then he followed closing the door behind him. Avery and the man were in complete darkness and she suddenly realized that she might have been safer with the corpses.