I sat Smokey on the ground and petted it behind its ears.

I smiled. This was my first Pokémon. My companion for life.

“I bet you’re going to have tons of fun with Lucky.”

“Litten?” Smokey turned its head to one side.

“Lucky is my Mom’s Meowth,” I explained. “He likes to wake me up each morning although he sleeps in my mom’s room.”

“Are you going to go home and show your Mom your new Pokémon?” Professor Kukui asked.

“But first a Pokémon battle!” A new voice exclaimed.

We all turned to see a young boy standing near the gate to Iki Town.

He ran over Pokéball in hand, “So do you wanna battle?”

Kahuna Hala stepped in, “Don’t you want to introduce yourself first before you jump into a battle with a complete stranger?”

He opened the Pokéball and the red beam of energy turned into the grass owl like the one I saw earlier.

“Row, Rowlet!” He flapped his wings and landed on Hau’s shoulder.

“Your Litten looks really cool, too!” He said with a large grin on his face.

“Oh. Thanks.” I said picking up Smokey.

“My grandson here can be a little over zealous,” Kahuna Hala said. “He is a new trainer like you, Alexis. I think a battle would be good for the both of you. There’s a lot of trainers out there willing to battle you and you need to learn how to fight alongside your new partner.”

“Do we really have to do a battle here?” Lillie asked. “I don’t like when Pokémon getting hurt.”

“Don’t worry Lillie, Pokémon battling is a part of each trainer’s journey across Alola. Trainers must help their Pokémon become stronger so they can eventually take on each of the island’s Kahunas.” Professor Kukui said. “Plus we have plenty of medicine to heal them after the battle.”

Lillie mulled it over for a few seconds and turned to me. “I’ll watch to support you, Alexis.”

“Ok so are we doing this?” Hau asked growing impatient.

“The Pokémon battle between Hau and Alexis is about to begin. This will be a 1 v 1 battle with no substitutions. The first Pokémon to knock the other one out using their moves will be declared the winner.” Kahuna Hala said. He was negotiating the battle. “Are you ready, Alexis?”

I looked over and Lillie was giving me a thumbs up although her expression said that she was reluctant to watch.

“Go Rowlet!” Hau shouted and Rowlet flew out and landed in front of Hau. 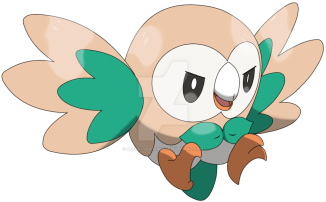 “Go Smokey!” Litten leaped out of my arms landing on its four paws.

Rowlet flapped its wings and took to the air and charged head first towards Smokey.

Smokey rolled to its side and Rowlet’s tackle missed. Rowlet kept flying and circled around similar to the spearows. 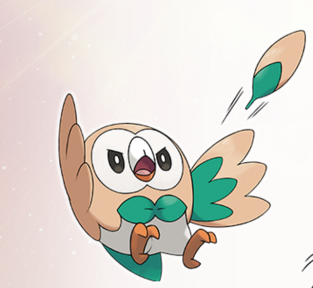 Rowlet opened up its wings and green leafs shot from his wings towards Smokey.

Smokey wasn’t fast enough to dodge this attack and the leaves hit him directly. He managed to shake it off without too much damage.

“Grass attacks are weak against fire Pokémon!” Professor Kukui yelled to me.

Smokey opened up its mouth and let out a fire ball. It shot out and hit Rowlet in the middle of its chest. Rowlet fell and hit the ground.

Rowlet got up on its two feet.

Smokey let out another ember. A fire ball was heading directly at Rowlet.

Rowlet managed to take to the air again and this time the fireball sailed by without striking the grass owl.

Rowlet took off head first and struck Smokey. Smokey rolled backwards and struggled to get to its feet.

Another direct hit and Smokey got tossed again. He managed to land on his feet but he was barely able to stand. Another attack and he was finished.

“One more time, Rowlet. Use tackle!”

Rowlet circled and went in for another attack. I had to think fast.

Smokey whipped out its claws and managed to make direct contact with Rowlet as it came in for the tackle. They bounced off each other and Rowlet fell to the ground.

Smokey shot out another ball of fire and this time it struck Rowlet with ember.

Rowlet fell on its back. Its eyes dizzy and it didn’t seem to move.

“STOP!” Hau ran out into the middle of the battle arena and picked up Rowlet in his arms.

“The battle is now over. Since Rowlet is no longer able to battle, Alexis and Smokey are declared the winner!” Kahuna Hala declared.

I ran out into the middle of the battlefield and went to pick up Smokey. He was just sitting there licking its paws and trying to clean the dirt off its fur.

“Come on, silly!” I picked him up and ran over to Hau.

“Yeah he’s fine.” He said. He didn’t sound bitter so that was good.

I bent down and saw that Hau had a purple bottle in his hand. He sprayed it on Rowlet and it seemed to be better instantly.

“That’s a potion.” Professor Kukui said. Everyone had gathered around us. “It’s a synthetic medicine that can be found in Poké Centers. You can use it to heal Pokémon after battles.”

Kukui handed me one just like the one Hau used on Rowlet and I sprayed it on Smokey. Besides being covered in dirt, it seemed completely fine.

Hau opened his Pokéball and Rowelt went inside. I opened mine as well and Smoked disappeared into the Pokéball.

“That was a great battle, Alexis! We’ll have to do it another time.” Hau said. “I plan on getting even stronger and next time it won’t be so easy.”

“Alexis, can I talk to you for a second?” Kahuna Hala asked.

We walked over to the Iki Town gate.

“I was just wondering if you would tell me about your interaction with Tapu Koko in your own words.”

“Ummm… sure.” I told the Kahuna what happened mirroring Lillie’s telling of the story. About following Lillie down Mahalo Trail, crossing the wooden bridge, blocking Nebby from the spearows, the explosion of energy, falling, being saved by Tapu Koko, and finding the sparkling stone.

“Wait. Lillie never mentioned a stone. Can I see it?”

I nodded and searched my bag. I pulled the shiny rock and handed it over to Kahuna Hala.

“Interesting,” he said flipping it over and examining both sides. “You found this stone after meeting Tapu Koko?”

“Maybe Tapu Koko wanted you to find this stone, Alexis. Perhaps you are here in Alola because this is where you are meant to be. Maybe you have a destiny here in Alola which is tied with Tapu Koko and the other island guardians.”

At this I was practically speechless. Today went from 0 to 100 real fast. Getting my first Pokémon. My first Pokémon battle. And now a Kahuna was talking about my destiny.

“Is it ok if I take this with me, Alexis? I want to examine it some more,” Kahuna Hala said.

I turned and Hau, Lillie, and Professor Kukui ran up to me.

“Tomorrow there is going to be a huge festival tomorrow and you have to come!”

“Great!” He replied. “I’m going to head home now, got a big day ahead of me tomorrow! We’re going to start our Pokémon journey after the festival!”

“Yeah Hau thinks it would be a good idea for me, you, and him all to travel around Alola together,” Lillie said.

“Yeah, what do you think?” Hau asked me.

Hau and Lillie both looked me with eager expressions.

“I think that’s a great idea,” I said with a big smile.

“Great! We’ll travel the Alolan region together!!” Hau exclaimed. “But for now I better head home and get ready for tomorrow. Alola everyone!”

“Alola!” We all said back. We waved as Hau and Kahuna Hala walked off together back to Iki town.

“We should probably get you home too, right Alexis?” Professor Kukui said.

Professor Kukui and Lillie both escorted me home. Lillie talking to Nebbyin her bag and Professor Kukui talking about how great the festival was going to be. I was still thinking about Tapu Koko and what Kahuna Hala said about my destiny.

“Huh?” I said shaking the thoughts out of my head.

“I said that I thought you did a great job today in your Pokémon battle,” Professor Kukui said.

“You and Smokey are going to be best of friends! I can tell.” He said as we continued down Route 1.

Eventually we made it to my house and they dropped me off.

“Alola!” I said waving at the two of them as they left.

I opened my front door to see my Mom was still up. She was at the dining room table looking through our moving boxes.

“Alexis!” She said with a huge smile on her face.

“So how was your day? Did you get your first Pokémon?”

“My day was crazy! But I did get a Pokémon. I think you’ll going to love him.”

I pulled out my Pokéball and opened it up revealing Smokey.

He looked around my house with a confused look on his face.

“Awh what a cutie!” My mom said as Litten and Meowth continued to talk to each other.

“Thanks Mom. He’s a litten. A fire type. But his name is Smokey.”

“What a great name.” She said as picked up Smokey and put him on her lap.

“The two of you look great together! I’m sure you’ll be the best of friends.”

“Yeah that’s what everyone keeps saying.”

Mom and I laughed.

“Ok well I better head to bed,” I said. “There’s a festival in Iki Town tomorrow and Hau invited me to go.

“He’s just a friend, Mom. I actually had a Pokémon battle with him today?”

“Me and Smokey won!”

“That’s fantastic! You’re a Pokémon master in the making!” She said with a smile.

“Alright off to bed with the both of you!”

Litten jumped off my mother’s lap and ran over to me. I picked him up and carried him to my room. I sat down on my bed and set him next to me.

I pulled the blankets up around me and Litten made himself comfortable at the foot of the bed. I laid there a moment my thoughts stirring but eventually exhaustion came over me and I fell asleep.