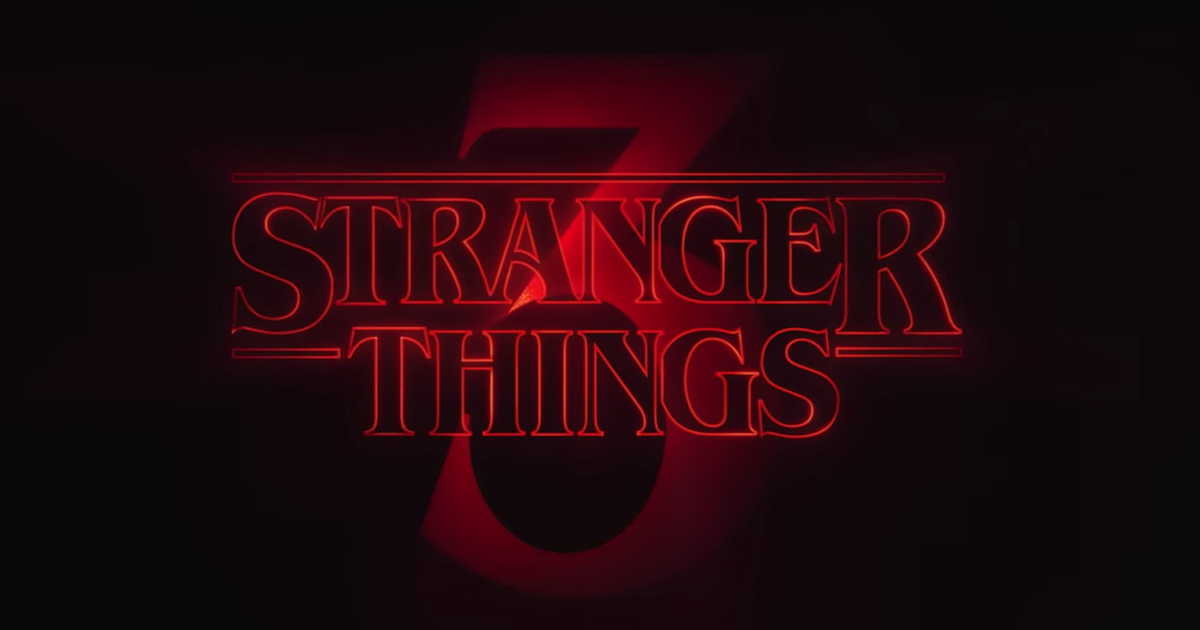 ****WILL CONTAIN SPOILERS FOR STRANGER THINGS SEASON 3!! You have been warned.*****

That’s right, I’m back! I know you all missed me and were counting down the days until I returned. Well count no more, because I have returned. After such a disastrous month where I published very little, I decided to just let June die and come back strong in July as I try my hardest to keep up with the upload schedule I set for myself. If you are new here, usually I try to post Weekly Blogs on Sundays, Poems on Wednesdays, and Writing Prompt Pieces on Fridays, but I have fallen into a bit of a rut due to a mix of burnout, writer’s block, and work. But I’m back and I’ve used these two weeks to prepare and try to get a little bit ahead on writing pieces. Again, if I miss uploads, don’t be alarmed. That just means I probably got busy or just fell into another pit of writer’s block. Either way, there are plenty of stuff on the website to read while you wait on me to climb out of that pit. That aside, I hope you have a wonderful month of June and are enjoying your summer. I know I’m sweating to death, but I drink plenty of water so it all works it self out in the end.

One thing I have made time for while I was writing new pieces and going to work, was watching the latest season of Stranger Things. Now I have written about Stranger Things in a Weekly Blog before, but that was two years ago and the most recent season came out ten days ago, so I think it’s fair that I get to talk about the show again. I just finished Season Three and things are still fresh on my mind, so let’s talk some Stranger Things! Also, like I mentioned, there will be MAJOR spoilers for all seasons of the show, including Season 3. If you haven’t watched the show, go watch it! It’s really good and worth getting Netflix. Then after it’s over you can pretty much cancel your subscription. Ok, enough stalling. Time to gush about this show.

Stranger Things Season 3 is a show that is firing on all cylinders at all time. It has comedy, 80’s movie tropes, action, suspense, and horror all wrapped up into one. Now those have been staples of the show since Season 1, but Season 3 really turns the nob up to Eleven…heh… Eleven… I mean just comparing the soundtracks of Season 1 and Season 3, I swear that their music budget was probably ten times larger this time around. The first episode of season three is jam packed with music and it feels like every scene has its own soundtrack. Then we have the characters. You obviously have the main cast like Finn Wolfhard playing Mike, Millie Bobby Brown playing Eleven, David Harbour playing Jim Hopper, and Winnona Ryder playing Joyce Byers, but the assemble doesn’t stop there! So many amazing characters played by excellent actors. But on top of that, we have old characters with much bigger parts to play like Erica (played by Priah Ferguson) getting a full nerdy arc alongside Dustin (Gaten Matarazzo), Steve (Joe Keery), and a new character, Robin (Maya Hawke). There’s also the budding friendship between El and Max (Sadie Sink) which I loved. In Season 2, Max was seen as a threat by El, but in this season they get to go to the mall together, talk about how stupid their boyfriends are, and just live a fun 80’s teen life. Plus Max and Mike have some back and forths about El and how she needs to be her own person with her own interests, likes, and self image that doesn’t rely on El’s connection to Hopper or Mike. Then you have new characters that really shine. Obviously Robin is a favorite and she plays perfectly off of Steve and Dustin, but there’s also Alexei (Alec Utgoff) who really shines with his natural charm despite only speaking Russian the entire time. I can’t really do all of these characters justice, but just know that I love them all so much and the characters arc in season 3 are all very good. The only character that still feels a bit under utelized is Will Byers (Noah Schnapp). Unlike other seasons, he is not stuck in the Upside Down or possessed by The Mind Flair, but for the most part he is kind of relegated to an early warning system for The Mind Flair. His stuff about being Will The Wise, wanting to play D&D, and his struggle to change when his friends get girlfriends is good, but the later half of the season, he is not really as strong as a character as I would like him to be.

Stranger Things also excels with its branching narratives and the way they all tie in together at the end. They started this story structure in Season 1 and since then they have adapted a “if it’s not broke, don’t fix it” attitude. Stranger Things handles a large ensemble cast by splitting the cast in to many distinct groups that all have to deal with certain parts of the larger story. Season 3 had the group split up dealing with all different, but related, problems. Joyce and Hopper are focused on the large machine in Hawking which the Russian’s are using to open the gate to The Upside Down. Robin, Steve, Dustin, and Erica are handling the Russian code and the conspiracy of the Russians taking over The Stallcourt Mall. Mike, Lucas (Caleb McLaughlin), Will, El, and Sadie are focused on friendships and relationships as well as The Mind Flair, it’s possession of Sadie’s brother, Billie (Dacre Montgomery) and “The Flayed.” And finally we have Jonathan Byers (Charlie Heaton) and Nancy Wheeler (Natalia Dyer) working at the local newspaper uncovering the strange things going on with rats and the fact that people in Hawkins are getting replaced, Invasion of The Body Snatchers style. All of these branching story lines relate to one another and come together in a big way when the Mind Flair attacks Starcourt Mall to take out El and they have to invade the Russian base underneath the mall to close the gate and kill the monster.

Now let’s talk about that final episode. It was a heavy one which took a heavy toll on me as I watched it. Obviously there was fear and suspense as The Mind Flair attacked the mall and threatened the characters. The use of fireworks to keep the creature distracted was really cool and seemed perfect for the show. Then you had Billie snapping out of the mind control to hold the beast at bay for a moment. Billie was a villain often times on the other side of the main characters, but in this moment he sacrifices himself to keep El safe. A hero’s death for a character that I had a hard time liking. I mean Dacre Montgomery definitely has the charm, but he is just so good at playing a bad guy. Then there was a death I did not see coming. I try to be as spoiler free as possible. I have avoided r/StrangerThings like the plague to make sure things don’t get spoiled, but I saw something on Twitter talking about how something bad happens to Robin. I thought for sure they were going to kill of Robin in the final episode, but I’m so glad they didn’t. However while I was focused on Robin, Stranger Things came in with a surprise sucker punch to the throat and killed of Jim Hopper. Hop dies! I can’t believe it. I thought he was safe. I thought he had plot armor like the rest of the main crew. I mean, David Harbour is so charming and nice and him and Hop and Joyce were supposed to form a perfect little family together. But no. Hopper is trapped between the machine and the gate and Joyce has to destroy the machine to save everyone else from The Mind Flair. The machine is destroyed and Hopper is destroyed with it. It broke my heart to see him go. I am glad that they didn’t do some impossible fake out or some Deus ex machina to keep him alive. That would have felt incredibly cheap. I just hope we get some flashbacks with Hopper in it, next season so I can get my yearly dose of David Harbour.

So yeah, that’s where Stranger Things Season 3 ends. The gate is sealed, the Russians, temporarily defeated, and Joyce, Will, Jonathan, and El packing up to move out of Hawkins. It seems very likely we will be getting as Season 4, but I’m guessing it’s going to be over a year before it is released on Netflix. I really need more Stranger Things episodes! This season also feels like a mid-point meaning that a 5th season is also probably on the far off horizon. I know Netflix is going to want to keep this going for a long, long time and it’s possible that The Duffer Brothers will keep on telling stories in this universe. I mean, the original idea for the show was to have the story jump between different places and different characters between seasons. I’m glad they didn’t do that because I absolutely love this cast and I think The Duffer Brothers knew there were millions of fans who felt the same thing. So a spin-off could come after Stranger Things proper ends. Then there is El’s “sibling” who she finds in Season 2, Episode 7 which has her own abilities. We know El is not alone and that there are others which makes good spin-off material, but that episode was also one of the lowest ratings of all the Stranger Things episodes, so maybe people don’t want that. I’m just throwing out ideas! It’s the Stranger Thing’s withdraw. It’s already starting.

Stranger Things Season 3 is an absolute blast which is better and bigger than ever full of laughs, scares, and amazing characters. I really enjoyed the show and will be going back to watch the entire show again, very soon. In my opinion, it is really one of the best Television Shows out there. Seriously, when is Stranger Things Season 4 coming out!?

Thank you for reading that Weekly Blog. If you liked it, feel free to give it a like or leave a comment down below. Feel free to share your favorite moment from Stranger Things Season 3 or from the other two seasons. Also if you have any other shows you think might scratch that Stranger Things itch, feel free to leave suggestions down below in the comments as well. If you really liked this Weekly Blog, you can Follow me here on WordPress and become a part of this wonderful, positive community I’m trying to cultivate on the internet. No matter if you are a new reader or if you’ve been reading my stuff for a long time, just know that I really appreciate all the love and support you send my way. It really makes my day to see people reading my stuff and enjoying it. There are also over 400 other pieces on the website ranging from Weekly Blogs, Poems, Writing Prompt Pieces, and Pokemon Fanfiction, so if any of that interests you, I encourage you to go take a look.

Thank you again and I hope you have a wonderful week!

Header Photo Credit to Netflix, but I found in on Mashable
https://mashable.com/video/stranger-things-season-3-teaser/