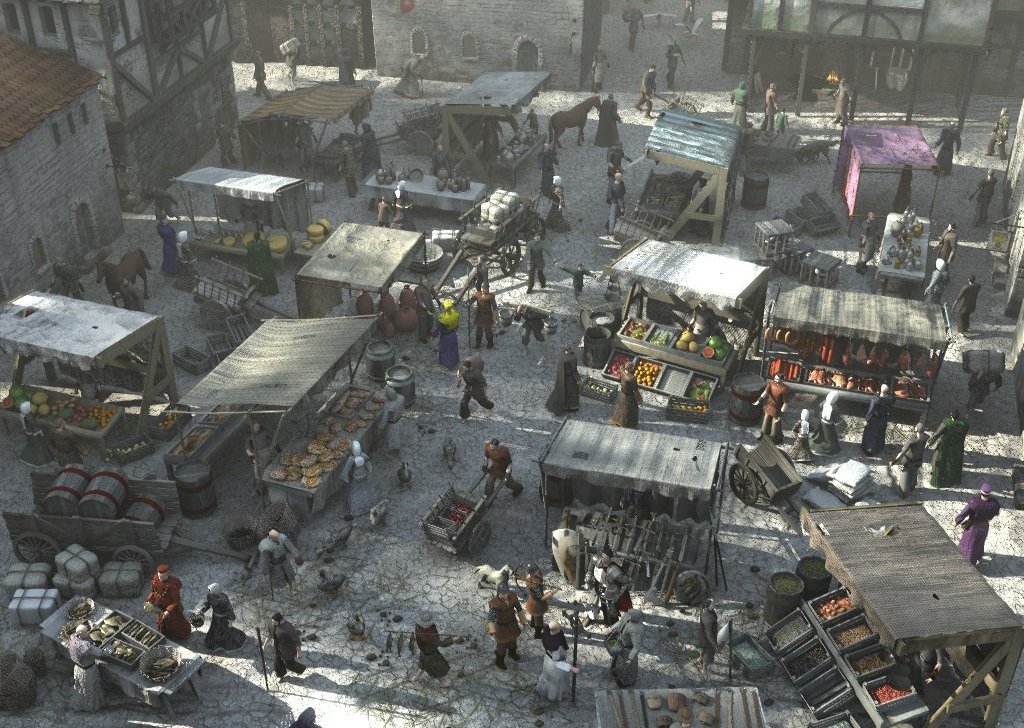 The group of adventurers stood outside of the stables down the road from The Pilgrim’s Rest. They stood around discussing what they were going to do next. Riffen had his sights set on finding his close friend, Lillian, while Tak and Sigthyme were determined to find an adventuring guild.

Juniper threw out the idea of the group meeting up at The Pilgrim’s Rest for dinner after they accomplishment their personal missions and everyone seemed to agree.

Juniper then turned to Grace.

“Grace, you’re with me right?” Juniper asked her.

“Great, let’s go,” Juniper said and the two of them went on their separate way into the city.

“So what are we doing, exactly?” Grace asked as she scanned the crowds of people.

“Well I need to speak to someone here in the city,” Juniper explained. “I was lead to believe that there would be someone here that would know all about my brother Julian and….his condition.”

“He’s involved in some kind of dark magic, right?”

“I don’t really know all the details, but I know Julian would never do this on his own. He had a wonderful life in Perralyth and he wouldn’t just throw that away. Especially for something this dark. Devils and demons and all of that was never something Julian even cared to learn about, you know? I just have a feeling that something bad has happened to him.”

“So we need to find someone who knows about that kind of stuff. Demons and dark magic,” Grace said. “I don’t even know where we’d start.”

“I’m not sure either,” Juniper said. “Maybe a temple of some kind.”

“Why not?” Juniper asked. “They might know something about you and your…uh…”

“This is a large city full of all kinds of people,” Grace said. “Maybe some of them are good and would try to help, but I’d bet that more of them would see as a potential pile of gold and platinum coins. I just don’t trust the people, here, ok?”

“Yeah I guess that makes sense,” Juniper said. “Well if we aren’t going to any temples, then we need to find another source of information.”

“You can’t think of anyone else that might be able to help you and your brother?” Grace asked.

“Well,” Juniper placed her hand on her chin. “I was advised to find an Arcanist. Someone who knows a ton about magic. They might be able to help.”

“Uh….I’m not sure,” Juniper said with a small laugh. “I’m not really sure where anything is in this city. It’s quite large.”

“You can say that again,” Grace said.

“Maybe we can try talking to one of the city guard. They might have some idea of where we can find an Arcanist.”

“Well who else are we going to ask?” Juniper asked.

“We really need to work on your whole people problem,” Juniper sighed.

“People have a problem with me!” Grace said throwing up her arms.

Some nearby people turned to look at the two, standing in the middle of the street, and then continued on their way.

“Right. How about this? There seems to be some sort of market just down the way. Why don’t you check that place out and see if you find anything intersting,” Juniper said. “While you do that, I’ll track down a guard and ask them where I might find an Arcanist in the city. Alright?”

“Yeah sure, whatever,” Grace said.

“Just stay alert and be careful,” Juniper reminded her.

“Yeah, sure,” Grace said walking off toward the open market.

“Teenagers,” Juniper sighed before walking off to go find a guard.

Using Juniper’s keen tracking skills she picked up hunting in the woods, she was able to navigate the city fairly well and found a couple of guards walking through the streets. She quickly told them who she was and that she was searching for an Arcanist.

They commented that most magical folks can be found in The Eastern City of Garranthe, there was someone in the city who might be able to help her. Her name was Ms Zaffre and she was an informant to The Xylon Government when it came to magical artifacts discovered during the mining process or any magical beasts that might stumble over the Gaea Mountain Range and threaten the city. The guards then informed her that the easiest way was to pass through the open market into the richer, central part of the city. There she would need to seek out a place called The Wicked Scepter. It had an evil sounding name, but it was a general goods shop that specialized in magical items as well as a place to house guests who specialized in Arcana.

“Thank you so much,” Juniper said to the guards before heading off toward the marketplace.

She was equipped with the knowledge she needed and now she just had to find Grace.

This was actually easier then Juniper first thought. Grace had a knack of slipping away and being stealthy when she didn’t want to be found; however, this time, Grace was very easy to find.

In the middle of the marketplace, there was a large crowd forming around one of the merchant’s shops.

Juniper’s ears picked up on Grace’s screams and yells, and Juniper jumped into action. She quickly shoved her way through the crowd as she made her way toward Grace.

As she burst through the first row, Juniper saw a large, human man grabbing Grace’s arm and holding her as she struggled against his grasp.

Both Grace and the man looked over toward Juniper.

“Back off!” The man yelled. “This girl is a thief and she will be dealt with.”

“Let go,” Grace said as she tried her best to escape, but his strength was no match for hers.

“Not until the city guard get here. Then she will turn out her pockets and I’ll get my merchandise back,” The man said.

“I don’t know what you are talking about,” Grace said. “Your stuff sucks. Nobody wants it. It’s not even worth stealing.”

“Please, sir. There must be some kind of understanding,” Juniper said taking another step forward. “What kind of merchandise is missing.”

“I’m a jeweler,” The man said turning toward Juniper. “And this thief stole a ring from me.”

“I don’t even like rings,” Grace said as she continued to struggle in the man’s grasp.

“You like them enough to steal one,” The man snarled at Grace.

“Please, sir. Please let go of her. We can figure this out, but you are hurting her with your grasp,” Juniper said.

“I’m not letting this thief escape,” The man said.

They were at a momentary standstill as a new person entered the circle the crowd had formed.

A female voice cleared her throat and all three people turned to face her.

“What seems to be the matter?” The woman asked.

A tall, slender woman had moved through the crowd. She had pointed ears that looked like she had a hint of Elvish blood in her history. She had shoulder-lengthen her, which was silver and she wore a deep blue dress that went from her shoulders down to her ankles, just hovering above the ground.

“I think there’s been a misunderstanding,” Juniper said.

The man snapped out of his confusion and tightened his grip on Grace again.

“This little thief stole one of my rings,” He said.

“I did not!” Grace protested.

“Hector, please let go of the girl,” The woman said.

The man let out a sigh and released Grace. She quickly moved over toward Juniper and hid behind her.

“Now, I do believe there must be a misunderstanding,” The woman in blue said. “But if a ring did go missing, I would be willing to replace it. How much is it worth?”

The woman produced a small coin purse and set it in Hector’s hand.

“Here you go,” The woman said.

“Thank you,” Hector said as his face began to blush.

The woman turned toward Juniper and Grace.

“Now you two will come with me,” The woman said.

Then the woman raised her voice for everyone to hear.

“And the rest of you can go about your business,” She said.

There was a shuffle of people and a few whispers as the crowd began to disperse and Hector went back to his Jeweler’s shop.

“Follow me please,” The woman said as she turned and began to walk out of the marketplace.

Juniper and Grace silently nodded and began walking behind her, a few yards back.

“Are we in some sort of trouble?” Grace whispered to Juniper.

“We can just run for it,” Grace suggested.

“The woman did just get us out of a bad situation,” Juniper said. “The least we could do is hear her out.”

“One question. Did you steal that ring?”

Grace fell silent as her hand went to her pocket. After a bit of shuffling, she produced her hand and in her palm sat a golden ring.

“We are going to talk about this later,” She said, her tone reminiscent of a stern mother.

Juniper and Grace kept following the woman as they transitioned from the market district into a little bit richer district. The people were dressed nicer and the streets were a little better maintained. A horse and carriage passed by driven by a well dressed Dwarven man.

“Here we are,” The woman said.

All three of them stood in front of a larger building which looked like a mash up of an inn and a storefront.

“I appreciate what you did for us,” Juniper said. “But I have a few questions. Who are you? Where are we?”

The woman turned back to Grace and Juniper.

“My name is Ms Zaffre and this is The Wicked Scepter. I believe we need to talk.”

3 thoughts on “A Knowledgeable Ally [D&D]”