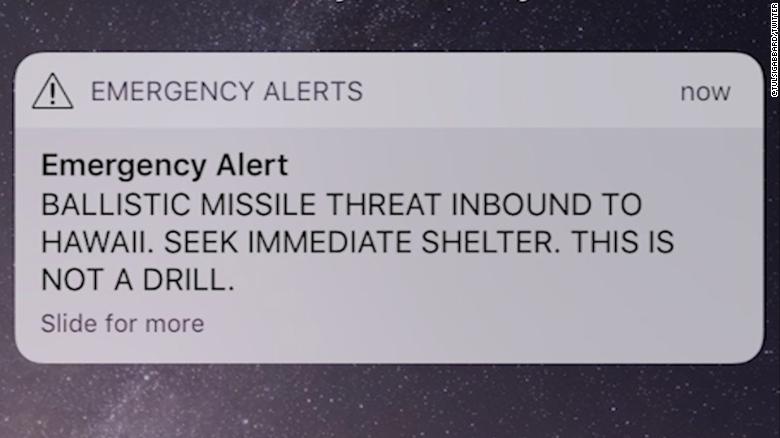 What would you do if you were asleep on a Saturday morning and were woken up at 8am by an emergency alert saying “Ballistic Missile Threat Inbound. Seek Immediate Shelter. This Is Not A Drill”? Well what sounds like an interesting thought experiment or even unique writing prompt was neither of those things for the citizens of Hawaii who received this message. This was a real thing that happened on Saturday, January 13th. It was a rude awakening that sent many screaming in panic. For them it was a fear that had become a reality. The world was ending. A missile was on its way to Hawaii. And this was a fear that lasted over a half an hour before a second message was sent out dismissing the first emergency alert as a mistake. It was over thirty, long minutes before Hawaiians knew they were safe and the whole thing was a false alarm.

Now you might be wondering why I chose to talk about this subject in a Weekly Blog and wondering you are getting a Weekly Blog on a Monday when you just had one yesterday all about Critical Role. Well I’m writing this special Weekly Blog for today because I had already written yesterday’s Blog when I heard about this news coming out of Hawaii. Also I wanted to make sure that yesterday’s blog was relevant as well as make sure that this blog was also relevant. I figured if I waited until next Sunday, this whole situation would have been forgotten about. The world moves fast and situations like this one makes me realize that we’ve entered an era where a nuclear bomb could rain down on us at anytime. It’s almost like we’re back in the Cold War Era of Mutually Assured Destruction. So yeah that’s why you’re getting two Weekly Blogs this week back-to-back. Now why am I talking about Hawaii and this false alarm message? Well I think it’s important for a few different reasons. Let me explain why.

First I want to say that this whole situation has gotten me a little shaken up. Now I don’t live in Hawaii or anywhere close to it. I’ve never even been in or close to the Pacific Ocean. This situation did not impact me or any of my close friends or family. But it still freaked me out. Because of the wonderful thing called the internet, I got to see video of a parent lowering their children into a storm drain (video here) because they believed it would be the safest place if a ICBM hit Hawaii. I read messages from people talking about their friends and family on the Hawaiian Islands called them and said their last goodbyes fearing they only had minutes to live. I saw videos of people panicking and running for cover knowing that at any minute, their life could end in a mushroom cloud. It’s so scary. Couple this with the fact that it took over a half an hour for anyone to say or do anything about it. There was no news coverage. No update to the original message. Nothing. For minutes people just huddled together hoping for the best knowing they were probably going to die. That’s messed up. Honestly, the whole situation has me a little rattled and got me thinking. Am I ready for the end of the world? What if I got that message this morning? What would I do? What would you do?

That’s a complicated question because it kind of boils down into two points I want to make. First is that people need to be physically ready for emergency situations. The second is that people need to be emotionally ready. What do I mean by this? Well when it comes to being prepared, there are a ton of steps people can take before a situation like this arises. No matter where you live in the world, there are things like natural disasters or situations you cannot predict will happen, but need to be prepared for anyway. What would happen if there was flooding at your house? A fire? A severe storm? Those are all situations that you need to be prepared for. According to Ready.gov, it’s important to have a “emergency preparedness kit.” Some of things they suggest to put in your kit is water, food, flashlight, first aid kit, extra batteries, dust mask, medicine, and important family documents (read the full list on Ready.gov’s website). It’s also important to update your kit making sure that the batteries are still good, the canned food hasn’t gone bad, and the documents are up-to-date. If you have one of these kits, you are going to be prepared for something as small as the power going out for a few hours to something as serious as a natural disaster. Now depending on how much you prepare, how big your kit is, and how many people you are sharing supplies with, one of these kits can last you a long time. It’s also important to have some kind of plan. Ready.gov also has some ideas for that. They suggest making a plan with your family where you talk about 1) How will you receive emergency alerts and warnings as well as updates, 2) Where will you take shelter, 3) What is your evacuation route, and 4) What is your plan to communicate with family members and friends? That’s a lot to think about, but the more you know about where to find shelter or how to communicate with people of authority or your friends and family will help you if something bad does happen. A lot of the panic you see around situations like Hawaii comes from people not being prepared and not having a plan if something happens. That’s where you can be a step ahead by having a plan and sticking to it. Just keep in mind that the more you do now to prepare, the happier you will be when a situation like this arises. No one ever thinks it’s going to happen to them. These emergencies happen to other people. Well it happens and it helps to be prepared for it.

Now the other part of my inquiry was “are you emotionally ready for the end of the world.” That’s a really deep question that I’m only going to scratch the surface on. I feel like no one can mentally prepare for the end of the world. Honestly even though we have hundreds of television shows and movies about the end of the world or the apocalypse, when it happens for real, it’s not going to be like the movies. If I’m being honest, I’d probably be one of the first people to go in a situation like that. I think it would mentally break me before I even had the chance to fight off zombies or radiated scavengers. Death almost seems like the preferred option. So I don’t expect you to have all your I’s dotted and T’s crossed when it comes to be emotionally ready for a world-ending event. But some people had to face their mortality as they said goodbye to their love ones thinking they only moments left before facing a nuclear bomb. That’s terrifying. So who would you call if you only had a few minutes left? Friends? Family? What would you say to them knowing these would be your final words? It’s a really sobering thought and I don’t know if I really have an answer for it. What I’ll say is that we never know when our day is coming. We could go in a nuclear apocalypse or a car accident. Maybe we will live for another one hundred years or maybe we only have a week left. It’s morbid to think about, but it can really put things in perspective. When you think about your life and look at your time left as a blessing, it can actually be quite liberating. When every second you are still breathing is a miracle, it can put things in perspective. It can help you realize who is most important to you and that you might be taking them for granted. It is hard to live our lives with no regrets. I know I have many. But maybe we can use an experience like this to eliminate future regrets. I ask you to take a moment and reach out to the people you care about. Let them know you are thinking about them. That you love them. You never know how much you have left or how much time they have left, so take  a moment today and let them know how much you care about them. Don’t leave things unspoken. Let them know. That way if something bad does happen to one of you, the other will know how much you mean to one another.

So yeah that’s my silver lining to such a scary and bizarre situation. If you are from Hawaii or if you know anyone who was in Hawaii at the moment this happened, feel free to share your story or theirs down in the comments below. I’d love to hear about it. I’m just hoping the Hawaiian government figures out what went wrong and fixes it going forward. It’s important that these systems are in place and work when they need to as well as having safety procedures in place making sure false alarms don’t happen like this again.

Well there’s my second Weekly Blog of the week. If you liked that, feel free to give it a like or leave a comment down below. Also why don’t you check out the rest of the website. Plenty of awesome things going on there and I would really appreciate all of the additional views for my other pieces.

I hope you tell someone how much you care about them and I hope you have a fantastic week!

Header Photo Credit to CNN’s story about Hawaii and the false alarm
http://www.cnn.com/2018/01/13/us/hawaii-false-alarm-react/index.html