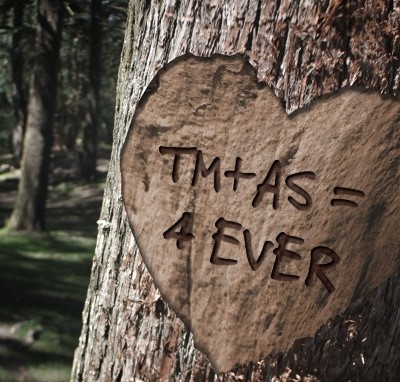 Writing Prompt: Come up with a mathematical formula to express something you know/believe.

A hand waved across my face and I blinked looking over at a woman sitting next to me on the couch. I looked over at this stranger but there was something familiar about her.

“Honey, are you ok?” The woman asked. “You were in a middle of saying something and you just stopped.”

Honey? This girl was laying partially on me cuddling up to me. Did I know her? She was so sure she knew me.

She waved her hand in front of my face again.

I stood up quickly and she nearly fell over since she was leaning on me. “I’m sorry, who are you?”

She looked shocked and a little scared mixed with a healthy dose of confusion. She opened her mouth but she didn’t say anything initially, “Is this some kind of game, Travis? I don’t find this stuff funny.”

Travis. That’s me. I know that’s my name. But who was she? How did she know my name?

“I…I…” I looked around this small studio apartment not recognizing anything. I’ve never been here before. “Who are you? Where am I? How do you know who I am?”

The woman stood up still looking concerned and confused. “Are you feeling ok, Travis?”

“How do you know my name!?” I yelled the question.

“Travis, you’ll wake the neighbors!” She tried to shush me.

I walked back and my back hit the wall behind me. I almost jumped. My breath was heavy and my eyes kept darting back and forth.

The woman looked a little more concerned and a little less afraid. “Travis…? What’s going on with you? Are you drunk, did you take something? Did you hit your head?”

She started walking towards me with one hand outstretched.

“Maybe you need to sit down,” she said. “I can call the hospital…”

She spoke softly trying to calm me down.

I tried to calm myself, “Just tell me who you are.”

“Oh…ok..” She said still taking small steps towards me. “I’m Ana you’re girlfriend for 2 years. You came over to my apartment tonight and we ate a nice dinner. We then continued watching Planet Earth and the woodland episode reminded you of our camping adventure last summer. We went camping and we ended up carving a little heart in a tree. Inside of it we wrote TM + AS = 4 Ever. You remember any of that?”

I stood there and my mussels relaxed a bit. All of these things sounded familiar to me but thinking about it made everything seem fuzzy. She seemed so certain that I wanted to believe her. “That…that seems familiar.”

“Ok,” She placed her hand on my forehead. “Do you feel hot?”

I shook my head. “Maybe I need to go to the restroom.”

“Oh ok well you know where it is,” She said. Then she kind of flinched. “It’s right there.”

She pointed to a door on my right.

I walked over and opened the door walking into the bathroom. I closed the door behind me. I looked around the bathroom not recognizing anything in this small, light blue bathroom. I looked in the mirror and saw my face. Something I recognized. I know this is me but everything else seemed so fuzzy. I tried to think back to the last thing I remembered. Everything was so fuzzy.

I clutched my head and then turned on the sink. I splashed water in my face and dried my hands and face with a hand towel. I checked my pockets. On the right I had my cell phone and keys. My left pocket held my wallet. Reaching in my left pocket my hand touched something made of paper.

I stood there puzzled and then pulled out the paper. It was a small crumpled piece of paper. I opened it and saw that it looked like a fortune cookie fortune. On the paper, it read: “Don’t trust Ana. Run and escape.”

I read it again and again. I didn’t recognize the handwriting but it was familiar. More familiar then anything Ana had told me. My gut wanted to believe this note.

There was a knock on the door, “Travis, are you ok in there?”

“Oh…ok…” She said through the door. “There’s some stuff in the medicine cabinet if you need it.”

“Ok thanks!” I looked around the room. There was a small window next to the sink. I walked over to it and lifted it up being as quiet as possible. I peered out. The apartment looked to be on the third or fourth floor. Even if the window was big enough for me to climb out of, I couldn’t escape this way. I turned around and searched the room again. Maybe I could fight my way out.

I shook my head. Did I need to fight? What was I thinking? My mind was racing and I wasn’t thinking straight. I tried to steady by breathing before opening the door and walking out into the apartment.

Ana was standing there with a look of concern still on her face. She was twirling her blonde hair around her finger.

“Feeling better?” She asked me.

“I think so,” I said. “But I think that I better head home and sleep this off.”

I jumped back a little surprised by her yell.

“I think it’s for the best,” I said walking past her.

“Wait,” she grabbed out at my arm holding on to me and preventing me from leaving.

She was standing there holding a thin, metal cylinder that kind of looked like a long tube of lipstick. She clicked a button near the bottom and the top popped open. It sprayed a light green mist into my face. I began coughing and then my vision became blurry. I fell backwards and I heard a thump as I hit the ground.

I raised my head looking around where I was. It was still Anna’s apartment but now Anna was accompanied by a black haired woman who was about three inches taller than Anna. I tried to get up but my body was tied to a chair.

“He’s awake already,” The black haired woman looked over at me and then back to Anna. “How much did you use on him?”

“I used the whole canister like you told me,” Anna replied quickly.

“Hmmmm… Well he should have been out for a least another couple hours.” She said.

“Mmmhmmmhmmm…” I mumbled my voice being choked out by the gag across my mouth.

The dark haired woman walked over to me and grabbed my mouth with one hand. “Don’t scream or I will kill you. You understand?”

I nodded slowly my eyes large. She removed the gag from my mouth.

I breathed deeply and looked at Anna and the new woman.

“Who are you and what is going on?” I said trying to be as calm as possible.

Anna opened her mouth and the new woman looked back at here. Anna closed her mouth without saying anything.

“We ask the questions here,” the woman said. “Be truthful with us and we won’t kill you.”

I looked at Anna. Her eyes were large and they looked like she had been crying. She looked away not making eye contact with me.

The woman looked back at Anna and then to me. “You had your chance, Travis. You didn’t accept our reality we tried to make for you and now you forced our hand.”

“Anna, go get me the sharpet knife you have,” The woman interrupted me.

Anna looked at the woman not moving.

Anna nodded and went towards the kitchen.

The woman turned her attention to me, “Now before we make a mess of the apartment. Why don’t you tell me where you got this?”

She held up the little piece of paper I found in my pocket.

The woman frowned. “You expect me to believe that?”

“I’m telling the truth!” My voice getting a little louder.

“You had some kind of immunity to the sleeping poison Anna used on you and you just found this note in your pocket?” The woman asked sarcastically. “That doesn’t really sound like the whole truth.”

Anna returned still not looking at me. She handed the dark haired woman a large serrated knife.

“Thanks, Anna.” The woman looked back to me. “Why don’t you tell me who you are working for? Tell me the truth or I’ll have to use this.”

The woman brought the knife up close to my face. “I…I… don’t know what you’re talking about.”

“If that’s how it’s going to be,” The woman bowed towards me and replaced my gag.

I tried to yell and scream but the gag completely blocked my attempts to get help.

“Anna, you might want to turn away.” Anna turned away and the other woman stood there for a second. She put both of her hands on the knife and plunged it into my leg.

The pain burned through me and I tried to scream and struggle. She placed a hand on my shoulder steadying me so I didn’t fall out of the chair.

“You should have just believed the reality we set up for you, Travis,” the woman said. “You and Anna together forever. That’s the life you could have had.”

She ripped the knife out of my hand and blood starting pouring out of the wound.

My vision became blurry as tears rolled down my face. I looked over at Anna who was crying audibly a few feet away not looking at me or the woman.

“Now tell me who you work for or else this is going in your leg again.” The woman said.