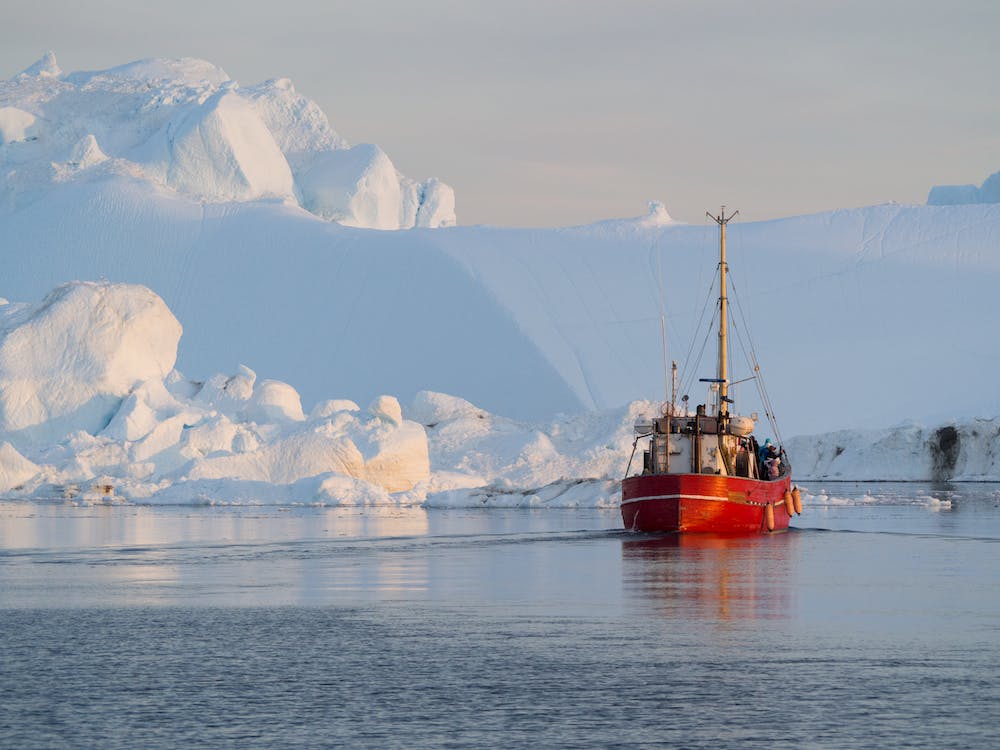 Writing Prompt: “You’re a guard stationed at a remote location, keeping watch over a sealed monster that if freed could spell the end of the world. It has tried to convince you to open it several times, but something’s changed recently; now, it just wants to talk.”

It was early morning when the helicopter touched down at the Thule Air Base in Greenland. Normally a base like this known for air defense, missile detection, and the occasional sighting of Russian submarines. But there is another secret here in the ice. For months now I’ve been tasked to fly out to the base to study what might some call a monster or creature. Others might call it Alien or Extraterrestrial. I, for one, do not make such assumptions. While it’s true we don’t know the origins of such a thing, it is possible that the subject was very much a part of our world. It could be just like us. Just another offshoot of early primates.

It’s really not easy to tell because the subject just isn’t one thing. It’s everything. Or all things. It can be whatever it wants to be. It’s a shapeshifter.

When I first saw the subject, it took me by surprise. It looked exactly like my mother. Just trapped behind thick, bulletproof glass.

The creature impersonating my mother banged on the glass and cried. They begged for me to let me out. They listed off information that only my mother could know. They must have kidnapped her and threw her in this military prison.

That’s when I learned that the subject could read minds. Or at least it seemed to pull the idea of people from my mind. They weren’t a perfect clone. It was like an actor trying to pretend to be my mother. Or it was like my mother was trying too hard to be my mother. It was uncanny once I really focused on the mannerisms and what the subject was saying to me. Even though I knew it was just a shapeshifter and not my mother, I had to take a few days away.

Ever since then, I showed up and studied the subject. I would ask questions and try to get as much information from the subject. However the subject was never cooperative. It would just beg to be let out. It would cry. It would shift to look like all sorts of things. The subject started with family members, friends, mentors, even a childhood teacher. It really dug into my mind for people to turn into. It even surprised me by changing into my aunt’s old rottweiler.

Months passed and little progress was made. I convinced the higher ups to keep the subject here at the base, isolated from the other personnel and that I would continue to make regular visits to study the subject. The military was interested in its shifting ability and its potential for espionage, medicine, and so much more.

I was gone on leave for over two weeks when I got the call that the subject’s vitals took a sudden nosedive and it seemed to be ill or dying. I hopped on a plane to the air base and then I was flown out to the remote location, further north in the ice.

When I landed I was debriefed on the situation and brought before the subject.

There was a small group of paramedics standing by reading the subject’s vitals. Heartbeat was low and breathing was short and shallow. The assumption that the creature was ill seemed very possible.

“Did you check the food for poison?” One medic asked.

“We’re running a toxicology report now,” The other one replied.

I stepped up to the glass and pressed my hand against it.

“Are you alright?” I asked the subject.

Just on the other side of the thick glass was the subject. They laid against the glass, head pressed up against it. They took on a male form of someone I did not recognize. They didn’t seem to be moving, other than the fact that I could see their chest rising and falling. Normally once I approached the subject would shift, but not this time. This time they remained the unknown male figure.

I knelt down until I was at their level and tapped on the glass.

“Are you alright? Can you hear me?” I asked again. “Do you feel sick?”

“Doctor,” The subject opened their eyes for a minute and then went back to resting against the glass.

“Yeah it’s me,” I said. “If this is part of some sort of plan to get out of here, it’s not going to work. They’d be more willing to send a team of military medics in there to hold you down and inject you with some sort of medicine.”

The shifter let out a wheezy cough that turned into a laugh.

“They can come in if they want. I won’t resist,” They said.

“Good to know,” I said. “Tell me, are you feeling alright? Do you feel nauseous? Have you been eating?”

“So many questions,” The shifter said.

“Fine. I’ll start with one. Have you been eating?”

“The gruel? Barely. It almost seems like a waste.”

“Of course I eat. Have you learned nothing from your time studying me?”

“I never know if what you do and say is your true behavior or if it’s just a farce. Something to convince me to break you out. I’m not even sure now if you are even sick or if you are somehow faking it.”

“Poisoned then? Did someone tamper with your food?”

The shifter shook his head no.

“Then what is it then? Tell us what’s wrong so we can fix it,” I said.

“Why? So I can stay here for another day? Month? Year? Why should I fight to stay in this prison any longer?” The shifter asked before closing their eyes and pressing their forehead against the glass again.

“Is this what this performance is about? Just another way to try to convince me to let you out?”

“You want to talk. That’s why you are faking this illness? To talk?”

“You can be so dense, Doctor. Like I told you, I’m not sick. I’m not faking anything. But I am dying.”

“How is that possible?”

“I can be anything. Turn into anything. Including this man. Do you know who he is?”

“He does,” The shifter looked up and nodded toward one of the soldiers standing nearby. The man kept his eyes on the two of us.

“His grandfather. Died of cancer less than a year ago. Terrible, terrible disease. Untreated and undetected, it could quite a number to your body,” The shifter said.

“You gave yourself cancer? Why?”

“It’s progressing in me far faster than it would a normal person. I give myself very little time left in this place,” The shifter said, a sly smile across his face. “I’m only sorry I didn’t think of it sooner.”

“I’m going to go get the medics. We’ll have the best team work on getting you cured,” I explained.

“You can try but at this pace I should be dead in a matter of minutes. Not enough time to cure cancer or even keep it from killing me,” The shifter said.

“What if I talk? You said you wanted to talk. I’m here. Talk. Turn into something else and end this,” I demanded even though I had very little idea of how it actually worked.

The shifter smiled once again.

“You ever wonder about your purpose in life, Doctor?” The shifter asked.

“My purpose? I know my purpose. It’s to study you.”

“But without me, what is your purpose then?”

“I’m a biologist. If I wasn’t here, I would be back home. Working for the university in their labs,” I said.

“Oh I know all about your research, Doctor. That’s why you were assigned to me. To study me. Figure out all about my body and my cells,” The shifter said.

I shifted my weight from one knee to the other.

“Is this what this is about? You want to talk about my research?”

“I want to talk about my purpose, doctor. Why you are here. Why I am here. Why any of us are here,” The shifter said.

“We need a medical emergency team, stat!” I heard medics yell behind me.

“Not too much more time,” The shifter said, their voice a low whisper.

“Why are you here?” I asked again.

“My purpose, doctor? I’m not so sure. I never quite figured it out,” The shifter said.

“You all kept me here in this cage, in the middle of the ice, far away from people because you viewed me as a threat. Someone who could transform myself into anyone else. A potentially dangerous person. Too dangerous to be kept anywhere else but here. But was that my purpose? Was I supposed to be a monster?”

I fell silent, unsure what response I could give to the subject. It’s true that we kept them here because we viewed them as a threat. A potentially world-ending threat as some of my higher ups described it.

“But what I don’t get is why no one suspected me of being something else. A gift. Sure maybe you wanted my blood for your medicine or my changing abilities for your spies. But not me. You never considered my purpose.”

I cleared my throat.

“And what purpose did you have in mind?” I asked the shifter.

The shifter closed its eyes, but continued to talk.

“That man behind you. Specialist Zimmerman. He didn’t get to see his grandfather much. He was too busy being stationed here. Couldn’t get his leave approved. He wasn’t there when his grandfather passed. Zimmerman’s biggest regret. And we got to chat one last time,” The shifter smiled. “Isn’t that a nice purpose?”

Suddenly all the beeping equipment around me began to wail and the sound of the heart monitor was a solid beep.

“We need to get in there, now!” The medic team yelled.

I stood up and took a few steps back from the glass. I looked over at Spezilist Zimmerman, who just stood there, looking at the subject. I could see tears welling up in the corner of his eyes, but he did not allow himself to cry.

I walked past the group of military personnel all running around in a panic. I could hear yells and commands being given as I just walked past.

“Let me know if you need me. I’ll be in the lab,” I said to no one in particular as I walked away from the glass box that held the now dead shifter.

One thought on “Shifter”