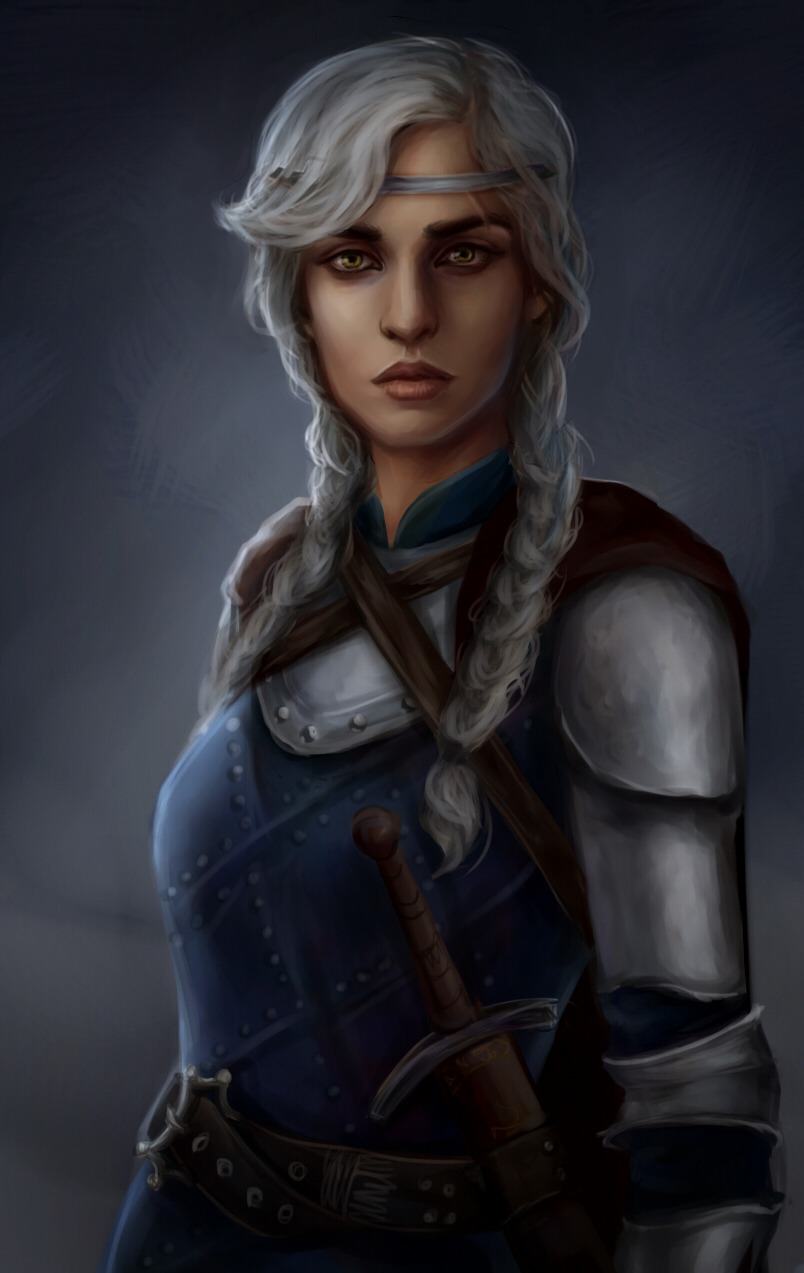 Sigthyme and Tak had met back up with Juniper and Grace at the Soulon Embassy. They made it just in time for the gathering in the main dining room. A large meal had been made for one final feast before Riffen’s departure. There at the large table, Riffen and Captain Lillian Evergreen were already sitting, just chatting with one another.

Sigthyme noticed that the two seemed a lot closer than they were when they were both in the Soulon Army Camp. They must have made up. Riffen also looked a lot healthier. He still looked injured and still walked with his metal cane. But there was a fullness to his face again and there seemed to be a genuine smile across his face.

Lillian looked relaxed. Every other time Sigthyme had seen her, she was fierce and stoic. It was like she was used to putting on a mask of professionalism, never letting down this facade. But here in this room with Riffen, there was a bit of softness pushing through that mask.

The others came into the room and took their seat around the table. Tak kept throwing pieces of peppermint into his mouth.

“Do you have candy?” Grace asked.

“Don’t worry. I have some stashed away for the trip to Frost Haven,” Sigthyme said.

“Pepper Mint!” Tak said as he threw another piece into his mouth.

“Nothing can ruin this guy’s appetite,” Sigthyme said and the group laughed.

The group had a lot of laughs that evening. There was a nervousness for the main five, but even Lillian and Pria had a nervous energy to them. This came out as excessive laughter, extra jokes, and everyone enjoying extra helpings of food and drink. It was kind of like one big party, but there wasn’t one thing they were celebrating. It wasn’t a high holiday or anything like that. Maybe some were celebrating Riffen being alive. He had gone through so much, but here he was laughing and eating with everyone else. Or maybe it was like a type of sorrowful celebration. Both Lillian and Pria were celebrating but they knew that at the end of the feast, Riffen would be leaving. If things went real bad, this would be the last time he ever saw him. Juniper, Sightyme, Tak, and Grace were going to make sure that didn’t happen, but still. They weren’t naive about the dangers along the road.

During this dinner Sightyme and Tak talked about their journey through the city and how they had secured the original horses and carriage they had brought into town. Apparently the owner of the stable held on to the animals fearing that the owners had died when the Pilgrim’s Rest had burnt to the ground. But Sigthyme had assured him that everyone had made it out alive and that they were ready to pick up the horses. He thanked the caretaker and paid him handsomely.

“It was all the money I had left,” Sigthyme said with a chuckle. “I really thought this adventuring thing was going to lead to riches.”

Then Sigthyme explained that before getting the horses, they had run into the young woman, Mara Dawnpelt. The excitable Robinheart had run into them and showed them where to buy the peppermint.

“She called it the best peppermint in town,” Sigthyme said.

“Oh I know that place. Silverbow sweets,” Pria said. “I stop in there from time to time to get a bag of toffee. She makes some great toffee.”

“What about you, Juniper? Grace? How was your trip?” Sigthyme asked.

“Well it didn’t go exactly as I hoped,” Juniper said.

Juniper told the group about how Grace and her had gone to The Wicked Scepter to see Ms. Zaffre, but she wasn’t there.

“She went to some magic school in Gerranthe,” Grace said.

“I don’t know if she wanted us to tell others that,” Juniper said to Grace.

“Well I mean. We can tell our friends. It’s fine,” Grace said.

“The Epanary Magic Academy? I’ve heard of that. It’s this large magic academy that just got up and running a few years ago,” Pria explained. “Apparently they don’t let males attend the school.”

“Apparently. I’m not really sure the reasoning behind it, but from what I’ve heard the academy is beautiful and they’ve had some success with teaching people magic,” Pria said.

“Anyway, Ms. Zaffre wasn’t there but she left me a letter,” Juniper continued, as she pulled out the letter. “Apparently there’s this woman in Frost Haven who’s an apothecary who may know something about my brother or how to help him.”

“Did you get a name?” Riffen asked.

“Uh…I believe it was something Gnash,” Juniper said.

Lillian spit up the wine she was drinking and almost choked.

“Yeah I believe so,” Juniper said.

“Good luck with her,” Lilian said with a laugh.

Lillian let out a long sigh.

“That lady is downright mental. Like completely gone. She’d always badger guards and tell them that there were demons running around the town and shadow monsters and all sorts of stuff,” Lillian said. “I never dealt with her directly but I heard stories.”

“Yeah sorry. That was a bit insensitive, I’m sorry,” Lillian said. “I do really hope that she can help you with your brother, but just know that what she says to you, might not be coming from the most sound mind.”

Suddenly the room grew silent, all the energy sucked from the room.

“Way to go, Lillian,” Grace mumbled to herself.

“Well this has been fun,” Pria said. “But you all need your rest. Tomorrow morning we’ll make our way over to the Northern gate and I’ll see you on your way. I’d like for all of you to leave before sunrise. That way you’ll get the most use out of the day on the road.”

Following the meal, the group split off and went their separate ways in order to get a good night’s rest. However, Grace stayed behind and grabbed Riffen’s arm.

“Hey Riffen, can we talk for a moment?” Grace asked.

“Yeah sure, we can talk,” Riffen gave her a smile.

Lillian picked up on this queue and excused herself.

“I was going to go read for a bit anyway,” She said as she left to go to her room.

“We can talk in my room if you don’t mind,” Riffen said.

Grace and Riffen walked to Riffen’s room and Shadow, the blink dog, followed behind them. Once inside the room. Riffen sat down on the edge of his bed while Grace sat in a wooden chair beside the writing desk.

“What can I do for you, Grace?” Riffen asked.

“I… I don’t really need anything,” Grace said. “I just…we haven’t gotten a chance to just hang out, you know?”

“Yeah I know. We’ve all been pretty busy. We haven’t really spent much time as a group. I’m sorry about that,” Riffen said.

“No, don’t be sorry,” Grace said with a little bit too much force. “It’s not your fault. I should have been here with you.”

“Nonsense. I don’t blame you for not wanting to hang out with me while I’m like this,” Riffen said.

“Hmmmm,” Riffen scratched his chin. “So this is about Lillian, then?”

“It’s ok if you don’t like her,” Riffen said. “Lillian can be a lot sometimes. She’s tough. And she thinks she always has to be that way. I’ve known her for a long time so I know how soft and caring she can be. But she doesn’t like showing off this side of her. She sees it as a weakness.”

“Well Lillian grew up in the streets. She didn’t have living relatives. No one to take care of her. She had to fight for herself. Lillian taught herself how to fight with a sword and she became great at it. So great that she joined the palace guard and ended up becoming the captain of the guard. She looked over me, even though I was never in real danger.”

“Yeah it is,” Riffen said. “But living a life like that. I mean I’m in no place to judge. I’ve never gone hungry. I’ve never lived on the streets. I don’t know those struggles. But I do know that many people can’t rise above it. The world can be rough and cruel and sometimes it just beats people down. The toughness that Lillian possesses is the reason she survived and why she’s here today.”

The two of them fell silent for a moment and Grace could hear the light breathing of Shadow, who had curled up at the end of Riffen’s bed.

“I’m not saying this to make you sympathize with her. Again, it’s ok if you don’t like her. But just know she’s a good person and she really cares about me,” Riffen said.

“Me too,” Grace mumbled.

“What was that?” Riffen asked.

“I…I know what that’s like. The whole sleeping on the street thing. I…I did that too,” Grace explained.

“I didn’t know that. I honestly don’t know a ton about where you lived or how you lived before Juniper found you,” Riffen said. “Sorry for not asking.”

“It’s alright,” Grace said. “I don’t really like talking about it.”

“Well you don’t have to if you don’t want to,” Riffen said.

“I lived in this town called Sandpile. It’s an awful town. Right on the coast so we get a lot of sailors and travelers. I didn’t really have anyone so I just ran around with a bunch of kids my age,” Grace explained. “We just stole things. Pickpocketed tourists. That sort of thing. We did whatever we could just to have a little bit to eat. We just tried to survive.”

“So what made you leave?” Riffen asked.

A memory came flooding back to Grace. She was standing there holding a dagger drenched in blood. The shouts of her friends telling her to run. They had to get out of there. She just stood clutching the blade, her hands shaky. Before her she saw the crumbled body of an older gentleman. He wore nice clothes and his gray beard was well trimmed. His eyes were open, cloudy and lifeless. His mouth was slightly ajar. Blood spread from the body soaking into the carpet and the wooden floor. More shouts. People were coming. She had to run.

“Grace?” Riffen’s words snapped her out of it.

She wiped her forehead.

“Uh…I…I just had to get out of there, you know? There was nothing there for me,” Grace said.

“Where did you go?” Riffen asked.

“I…ummm…I’m actually pretty tired,” Grace said, changing the subject. “I think we should go to bed. Get our rest, you know?”

“Oh. Yes that’s a good idea,” Riffen said. “Thank you for talking to me, Grace. I really appreciate it.”

“Yeah, uh-huh,” Grace quickly ran from the room and shut the door behind her.

Shadow raised his head to look at the door and then nestled his nose back into Riffen’s blankets.

“I hope I didn’t push her too far,” Riffen said, mostly to himself, as he placed a hand on Shadow.

Grace stood in the doorway, her heart racing and her breaths heavy.

“It’s ok. It’s ok,” She said as she brushed cold sweat from her forehead.

She tried to scrub the memory from her brain, but the deep crimson remained. The blood not only stained the wood, but it also stained her mind.