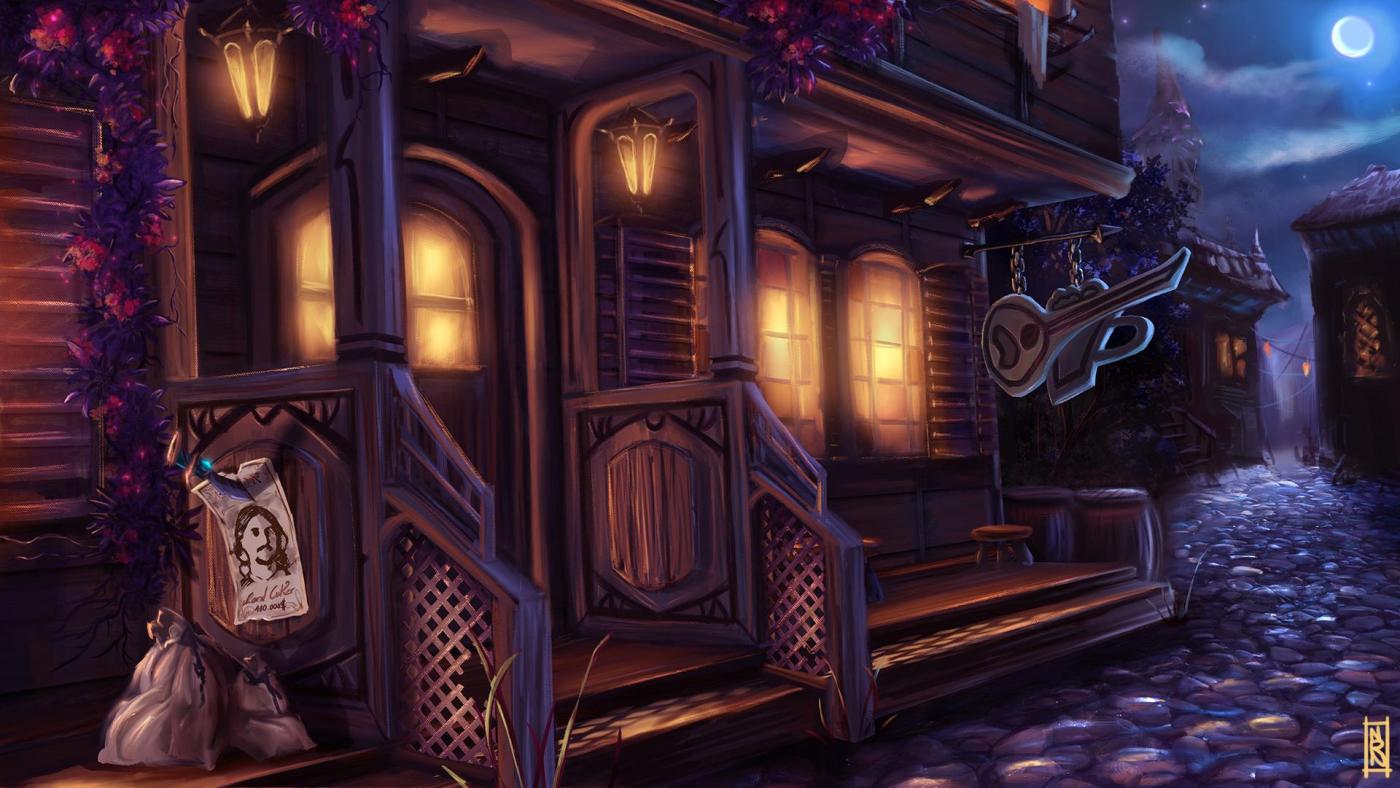 Writing Prompt: “You are a retired adventurer and an elf. Your party was comprised of people of a few different races. After all of you retired, you started having reunions every few decades, always the same place, same day. You have arrived at the location and been there for hours. You realize the rest are dead.”

It was a cold winter’s day when I arrived in the Dwarven City of Rock Crest. The steep mountainside the city was built into was already seeing it’s first days of snowfall and the winter’s equinox was close at hand. It was the time of year where I would travel away from home to meet up with some of my old adventuring buddies. Ever since the group sealed away the Dark Lord Cinderbane and went its separate ways, we made it a ritual to return to the city where it all got started.

I followed the familiar cobblestone streets as I made my way through the city to the small tavern where we all met that fateful day. I looked around as I strolled through Rock Crest. Not many things changed from decade to decade. Sometimes shops would go under and new shops would take their place or new Dwarvish actitecs would task themselves to restore old buildings, but beside that, everything looked as it always did.

Dodging a group of Dwarvish miners I took a left turn off the main road and found myself standing in front of The Golden Donkey. Honestly a terrible name for a pub, but in Dwarvish it was a little bit more passable. I looked up at the wooden sign, seeing that it had not been painted in the decade since that last time I was here.

I shrugged and opened the door, stepping into the familiar pub.

“Good afternoon, Brash,” I said as I stepped into the room.

I took a quick glance around The Golden Donkey. It looked just like the small hole in the wall that was near and dear to my heart. However it wasn’t always that way. When I first stepped into this place it was so dingy I thought I was going to literally pass out.

I laughed to myself as a head popped out from behind the bar.

“Thought I heard someone walk in,” The Dwarvish man said.

“Berk! Nice to see ya,” I said with a smile. “Where’s your grandfather? I was hoping to hear all about the most recent ales and brews he’s gathered.”

“Oh, Mr. Silveroak. I’m sorry to say that my grandfather has passed away. Two winters back a nasty illness swept through the town. Many people didn’t make it and my father passed on,” Berk said.

“I am so sorry to hear that. Your grandfather was a good man and a kind heart,” I said. “He always opened this place to me and my friends and I am eternally grateful.”

“That’s very kind of you to say Mr. Silveroak,” Berk said. “When he passed, he gave this place to me. So I hope I can continue to show my grandfather’s generosity to you.”

“Of course. Of course,” I said. “I’m sure that you will run this place well. I could always tell you had the entrepreneurial spirit.”

I looked around The Golden Donkey and noticed that the place was practically abandoned. I was the only patron in the bar.

“I don’t think I’ve ever seen The Golden Donkey this empty,” I said. “Is there some sort of festival in town taking everybody’s attention?”

“I wish. We could use a good festival,” Berk said. “Unfortunately most days look like this. The town-wide sickness was not the only bad omen cast over this town. People have been moving out and the amount of work around here has dried up. Less coin and less merchants mean the town is slowly becoming a ghost town. A few more years like this, the whole place might be empty.”

“Oh that’s horrible,” I said. “I always loved this town. I’d hate to see it fall apart like that.”

Berk nodded as they picked up a glass to clean.

“Well maybe you’ll turn things around. I’ve always heard that Dwarves are nothing but stubborn and persistent,” I said as I tried to encourage Berk.

“I hope so Mr. Silveroak. Anyway, is there anything I can get you? Dwarvish Ale? Elven wine?”

“I’ll just take an ale for now. I’ll get something fancy once everyone else arrives,” I said.

“Sounds good. One ale coming up.”

Berk reached below the bar and pulled out a cask which he quickly filled and handed the ale to me.

“Keep a tab open. We’ll pay once everyone else arrives,” I said. “Speaking of which, where are they? I thought they’d be here by now.”

“Who are you waiting for again?” Berk asked.

“My companions. Captain Jaq Redtide the Dragonborn Warrior and Pirate Captain of The Good Fortune. And then there’s Glamor Cass, Tiefling Mercenary and the best thief in all the land. The greatest friends I could ever have,” I boasted.

“Right, right. Dragonborn and Tiefling. I remember them well,” He said.

“It’s quite odd for Jaq to be late. He’s always very punctual,” I said as I sipped from my ale.

“Pretty harsh winter this year. Maybe he’s caught up on an iceberg,” Berk said with a shrug.

“I’m sure they are both running a bit late. I’ll just take a table for now,” I said.

“Sounds good. If you need anything else, let me know,” Berk said with a wave and then he returned back to cleaning glasses.

I took a seat in the corner at the booth where we used to sit. Looking it over I saw the small markings that Glamor made with their knife when they were nervous or stressed. Where I sat I saw some small scorch marks in the shape of lightning bolts. Whenever arguments got heated my hands would spark with electricity. Next to Jaq’s seat, there were small grooves in the floor. He’d always lean back in his chair and let out a hearty laugh. He found Glamor and I’s arguments funny.

I remembered back to when we first met up here, Jaq had started a bar brawl over a single silver coin being stolen by Glamor and I almost blasted a Dwarven patron with a lightning bolt. It was a huge mess, but after the fight subsided, the three of us were stuck together. Such a random event ending up setting us out on our adventure together. Adventures seemingly brought together by random ended up taking down one of the world’s greatest threats.

As I sat there reminiscing about our first moments together, the door opened and a young Sea Elf came into the bar.

“Hey Berk. Got your daily catch,” She said as she lifted a small box and sat it on the bar.

“Thanks for the delivery,” Berk said as he took the box.

He placed some coins on the bar and the Sea Elf pocketed them. They then turned around and saw me sitting in the corner. His eyes narrowed and then there was a look of recognition.

“Sir, sorry to bother you. Are you perhaps the Elven Hero, Breeze Silveroak?” She asked.

“Of course! You are one of the most powerful Elvish Sorcerers in all the realms. I heard all about you when I was growing up. So cool to meet you,” The Sea Elf said.

“Sorry to hear about your friends though,” She said as their expression soured.

She paused for a moment.

“What do you know about my companions? Tell me. Spit it out,” I said.

“Yes Sir,” The Sea Elf nodded. “Two years back there was this horrible storm that hit the Southern Coast. Captain Redtide and Glamor Cass were sailing through it, trying to find safe harbor. The storm was too strong and the ship sank beneath the waves.”

“Are you certain?” I asked.

“‘Fraid so. It was talked about all up and down the coast. My brethren even searched the ship days after the storm moved past. Unfortunately bodies weren’t recovered but there were enough unique markings on the shipwreck that they determined it was indeed The Good Favor. I’m very sorry,” She explained.

I just nodded my head.

“Thank you for this. I know there is no joy in delivering such a message, but I do appreciate it. I spent so much time in the Fey Realm that I was not there to hear about this,” I said.

“I didn’t know either,” Berk said, overhearing this conversation. “I heard about a ship going down a few years back, but didn’t know your friends were on it. Sorry.”

“It’s alright,” I said. “I knew I’d outlive them due to my Elvish heritage but I did not think it would be like this.”

The Golden Donkey grew silent as I finished my tankard of ale and sat it down on the table.

“Berk, I think I’ll take a bottle of wine now,” I said as small sparks of electricity gathered at the tips of my fingers.