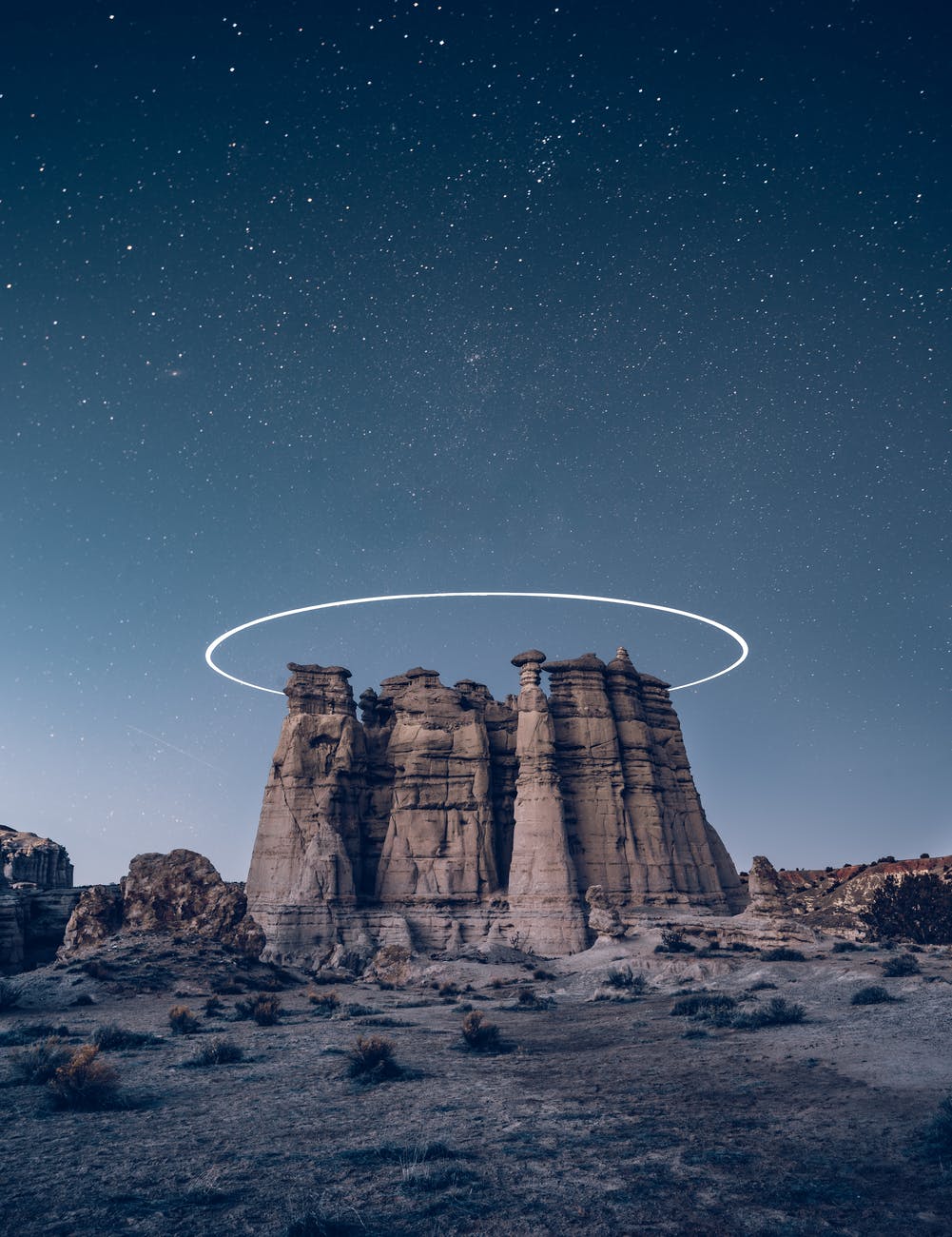 Writing Prompt: “If you wanna cross the desert, take a camel and go slowly. Do not go any faster and do not use any other form of transportation. If you see something moving in the sand, ignore it. If you see something looking at you, stare at it back. Don’t touch the ground until you reach the other side.”

I stood at the city gates and looked out on the horizon. The sun was just about to set beyond the large sand dunes. I knew that my journey would be a treacherous one and I stocked up with as many supplies as I could before heading to the East Gate. There I met a burly man with a thick, black beard and scars across his face.

He stood there holding the reigns of a camel.

“Lot bigger up close,” I said as I looked up at the mammal which was about seven feet tall from toe to head.

“Lot bigger things out there to worry about,” The man said, his look was intense and unmoving.

“You prepared for the desert?” He asked.

I folded my arms and looked at him.

“No. Tourist,” The man said as he scratched his beard. “Tourists never come back and locals never make the journey in the first place.”

“Money up front. Then it doesn’t matter what happens to you out there,” He said.

“Yeah I know. Money up front. Stay on the camel,” I mocked his words as I fetched my wallet from my bag and handed him the money.

“Do not like my words lightly, traveler,” He said as his eyes narrowed. “These rules will give you a fighting chance out there.”

“Uh yeah fine,” I said. “Can you repeat them one more time?”

“If you wanna cross the desert, take a camel and go slowly. Do not go any faster and do not use any other form of transportation. If you see something moving in the sand, ignore it. If you see something looking at you, stare at it back. Don’t touch the ground until you reach the other side,” He said like he was reading some old forgotten prophecy.

“Stay on the camel. Go slow. Don’t get off the camel. Ignore the stuff in the sand unless it stares at me and then stare back. Is that it?”

“What’s out there in the desert anyway?” I asked as I looked out toward the setting sun.

“Spirits of death,” The man said. “They move through the sand and watch travelers as they journey toward Al-Khatim. They are protectors and watchers.”

“Have you seen them?” I asked him.

He fell silent for a moment before pointing one finger at the scars across his face and chest.

“I used to lead people across the black sands to Al-Khatim. That was until I had one elitist tourist. Did not listen and leaped off his camel. I tried my best to save them, but the spirits killed them and left me scarred. Now I just take care of the camels. Let others risk their lives.”

“Now take these,” The man said, as he forced the camel’s reins into my hands. “You need to leave before sunset.”

“Why? What happens after sunset?” I asked.

I couldn’t quite tell if he was joking or serious, but either way I knew it was my time to leave. I had gotten all the supplies I could get and the warnings were fresh in my mind.

“Do I need to feed this thing or give it water?” I asked the man.

He shook his head.

“The camel is fine. It knows the way. Do not stop it or redirect it,” The man said. “Good luck.”

He slapped a hand on the back of the camel and it started to move forward, away from the town and toward the large sand dunes. I was used to riding horses which was a little bumpy, but the camel seemed to wobble side to side as it walked.

I wasn’t sure if the last part was more for the camel or more for me, but either way it was only the two of us on this journey now.

The camel walked forward traversing over the sand without an issue. It seemed to walk across the sand without really any hesitation or concern. It moved with purpose, but in a way where I guessed that this camel had made the journey several times. It seemed completely unaware of any danger.

Maybe I was projecting all of this on my mount across the desert because I was as nervous as ever. I had heard rumors about this place and the myths surrounding it. I had made it this far seeking the wonders of Al-Khatim, but the way that the guide had talked about it, I felt like I was moving toward my own death.

As the camel moved over the large sand dune, I noticed that the sun was barely a small reddish-purple dot on the horizon. Above me the black sky began to twinkle with small pinpricks of starlight. Out here there was very little light pollution which allowed the starlight to shine brightly over me. However my focus shifted quickly from the sky above me to the sand below me. It started out as dark, earthy tones but the shifting sands became darker and darker as the camel walked. Eventually the sand beneath me looked just as dark as the sky above me.

I looked around me as the last seconds of sunlight came to an end and I felt like we were walking across shadow and darkness.

The camel walked across the black sea of sand like nothing had changed. Sand was sand no matter the color. It’s path was forward so that is where it would go.

Over the next hour I slowly adjusted to the darkness and the dark sand below me. The desert also began to get colder in the nighttime. I knew that deserts get much colder at night compared to the daytime, but I could swear this cold was unnaturally chilly. My breath was visible in front of me as I wrapped the scarf tighter around my neck.

“Hope you don’t mind the cold,” I said out loud as I patted the camel’s hump.

The camel came to an abrupt halt and I had to grab on to the front of the camel’s saddle to steady myself.

I looked out at the sand dunes of black sand and I saw glowing purples lights.

“Wow. What are those?” I asked out loud, as I looked past the camel’s head.

Ahead of us there were small modules of purple light shining through the sand. They traveled through the sand like snakes slithering just below the surface. They seemed to move in purposeful, distinct lines.

“Movement in the sand,” I said out loud as the purple lights drew closer.

I averted my eyes and looked up toward the sky.

“Ignore them and keep on moving,” I said as I tapped the camel on its hump.

The camel took a little convincing but ended up walking again as the purple lights started to surround us. I continued to look straight up into the sky, but I could see the purple lights grow brighter. Low whispers began to fill the air and it was almost hypnotizing like a siren song. My curiosity was strong and I felt the temptation to look, but I resisted. I just kept on looking up as the camel moved forward.

The purple light began to dim again and the whispers ceased. We moved past the glowing purple lights and I stopped staring at the sky. No longer worried about what the purple lights could be, I quickly glanced behind me to see what looked like purple spectres slowly melting back into the earth until they became purple lights beneath the surface.

“That was close,” I said as I turned back around to face the front.

As we climbed over another sand dune of black sand, I noticed that the ground beneath us began to change. The midnight black didn’t change, but the ground became more compact. Instead of loose grains of sand, it was now compact earth and very rocky. It was almost like it was stone left after lava had cooled.

“Are we still going the right way?” I asked out loud, but obviously no one was there to answer me.

The camel just kept on walking forward, his feet now walking across the hardened stone. I barely had enough time to question how our environment had changed before I noticed something up in front of us.

At first I just saw large red eyes staring at me from the shadows. Then a silhouette outlined with deep red light began to get closer and closer.

“Woah,” I said pulling on the reigns of the camel as it came to a stop.

The creature crawled along the rocky ground and it started to come into better view. It looked like some sort of large lion or tiger. A large cat much larger than any I had seen with deep red eyes and red energy which seemed to glow in patterns all over its body. It let out a low growl, never taking its eyes off of me.

“Is this one I’m supposed to stare at or not?” I asked out loud.

The camel just let out a small grunt, but it didn’t move. It didn’t seem worried or scared of the large beast circling us. I on the other hand noticed the large eyes, big paws with sharp claws, and their muscular bodies which looked perfect for pouncing. I was very scared of these creatures.

As I looked out toward my left, there was another growl from my right. I quickly glanced over to my right and two more of these glowing animals were there, stalking across the rocky soil.

“How many are there?” I asked as I looked around.

From just the pairs of glowing eyes and glowing fur, I could see that there were three of these beasts surrounding me. All of them kept their eyes trained on me and the camel, never breaking eye contact. They just circled and growled.

“I’m looking at you. Just looking,” I said out loud, almost yelling at these creatures. “I’m just traveling through here. I’ll be gone in a second.”

The large cats continued to circle around the camel and growl at me. I did my best to look them in the eye. It was a bit difficult with three beasts, but I just kept looking from side to side, making sure any of them never left my sight for long.

As I sat there on the back of the camel, playing this game with the large cats, there was a new sight to behold. Ahead of us, a bright light lit up the sky and I turned to look at it. I was surprised to see a large stone structure made up of many, large stone pillars. It had been previously hidden in the darkness but now there was this halo of shining light hanging above the pillars and shining in all directions.

I looked back toward the glowing beasts, but they were nowhere to be seen. My best guess is that the sudden halo of light had scared them off. The camel started moving again and I steadied myself on the saddle and camel hump.

The halo of light was mesmerizing and it seemed to pull me toward it.

“ Al-Khatim,” I said as I looked at the stone structure and the halo of light. “I’ve made it.”

2 thoughts on “Journey Across The Black Sand”