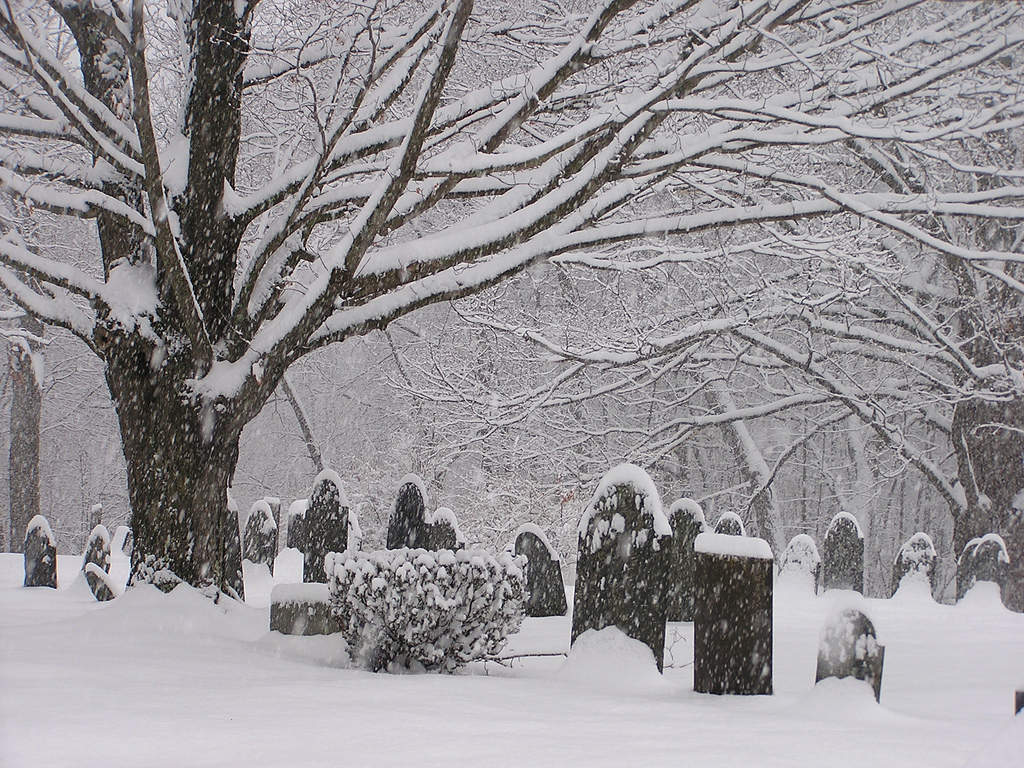 Two men stood together wrapped in thick black coats. They looked almost identical except one was tall with short, buzzed hair and the other one was shorter with light brown hair that touched his shoulders. Large, wet snowflakes fell from the sky clinging to the tree branches, the frozen ground, the men’s clothes, and the gravestone.

Although the headstone was partially obscured with white, you could still read the engraving.

The one with longer hair shivered a little bit and then wrapped his scarf tighter to his face. He brushed some snow out of his face but more snowflakes fell to take their place. The taller one did not remove his hands from the pockets of his coat. He swayed a little bit back and forth from standing on the balls of his feet to his toes. Both stood in silence for a long time staring down at the headstone.

Finally the silence was broken, “I wish I paid more attention when she laughed.”

The shorter man looked over and said, “Yeah me too.”

“She had the most obscene laugh.”

“Yeah you could hear it all the way across the room.”

“Probably across a whole stadium full of people.”

Both men looked at each other and gave a small grin. The second man then stared down at his feet.

“At least she’s with Dad now,” The first man said. “They’ll be together for Valentine’s Day.”

The second man continued to stare at his feet  not replying.

The second man let out a small, “Yeah.”

“Yeah… sorry I missed the funeral -”

“It’s ok. I know the weather delayed your flight.”

The two men waited in silence again. The snow continued to fall blanketing everything in white and dulling the sounds around them.

“So… How’s classes going?” The taller man asked to the second man.

A moment of silence.

Another moment of silence was shared between the two of them. The first man removed his hands from his pockets to brush snow off his coat and then put his hands back into the warmth of the coat.

“When do you think you’re be back?”

“Do you want to get dinner before you head back?”

“I have a big project due in a couple days so I have to get back.”

Again the two fell into silence which lasted longer than the silences before it.

“I wish I paid more attention when she sat me down to teach me lessons,” The second man said.

“Yeah she was always telling you to stay out of trouble,” The first man grinned.

“She must have thought that I’d turn out to be like you.”

“What do you mean by that?”

The two turned to each other and the first man saw that the second man was crying. Tears poured down his face and fell into the snow. The first pulled the second closer and they wrapped arms around one another.

“Just don’t get into any trouble, ok?”

They both laughed to themselves and it echoed throughout the cemetery.

One thought on “Writing Prompt #12: A Cold Day for a Funeral”