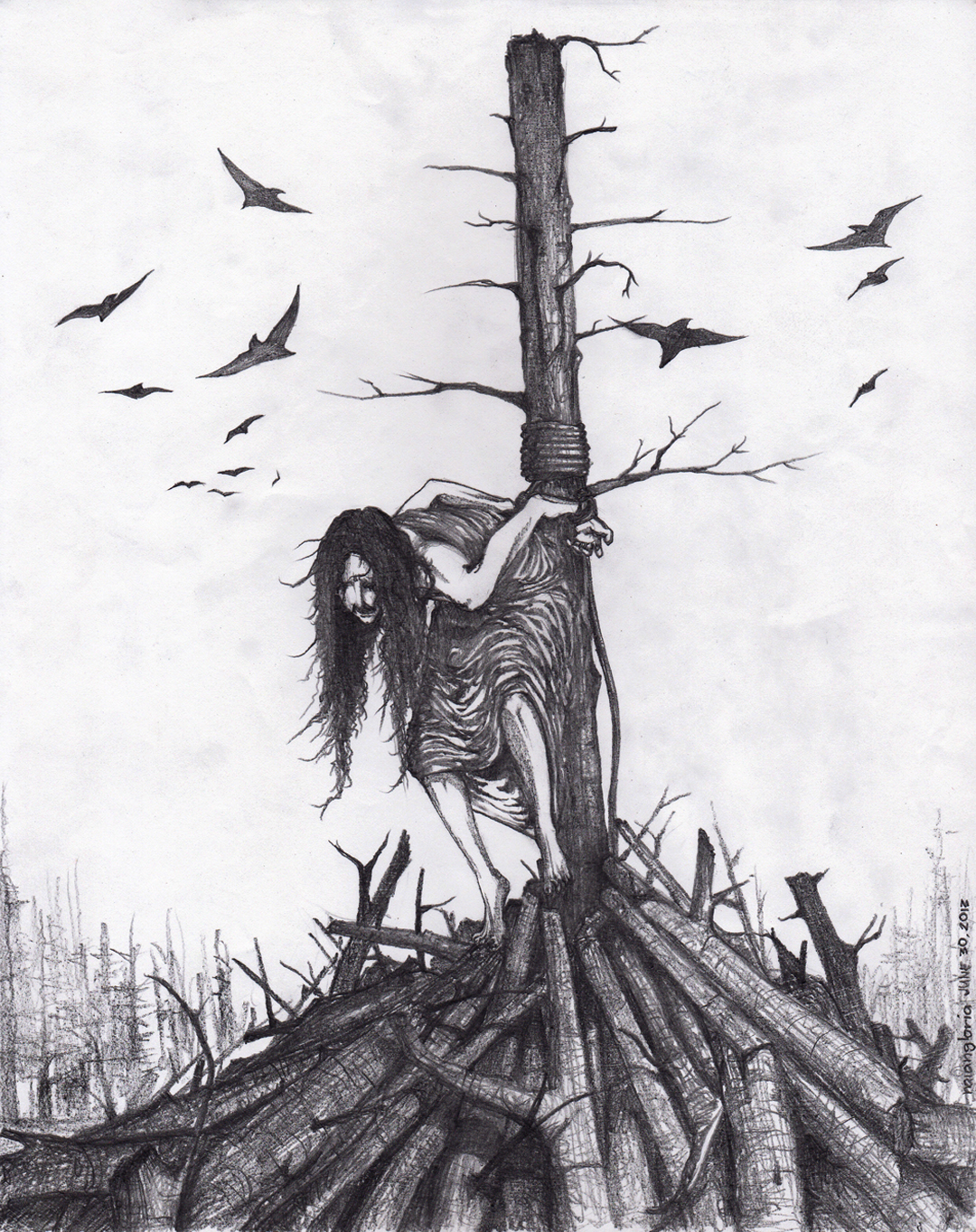 Writing Prompt: “He rushes onwards like a bloody tempest, destroying all in an attempt to free you from the stake that binds you to the pyre at your feet. For before he was a Hero, he was the boy that gave you flowers. And before you were exposed and branded a Witch, you were the girl that taught him love.”

I really didn’t think that it would end up like this. I had so much fun just minding my own business and enhancing my magic. But as they say, all things must come to an end. I guess my fun ends with fire and smoke and yelling?

My focus was on the wooden pyre beneath me that had begun to burn and create black smoke, but a sudden commotion drew my attention away from that danger. Instead I glanced toward the outskirts of the town square and over the crowd of people all calling for my death. I saw a streak of silver and movement.

“Move! Move!” A man yelled as he shoved bystanders out of the way.

He waded through the crowd with such a virosity it was like a feral beast. No one dared to stand up to him as he made it to the front.

I looked at him and his eyes met mine. He had an expression of anger and confusion but also sadness and longing. It was almost like he was thinking about a hundred different lives and how things could have been different.

I tried my best to call out to him, but they had gagged me fearing I would curse them or turn them into a newt or whatever.

“What is going on here?” The man asked as he looked around. “Put out the fire! Release her!”

“We can’t do that, Isaac,” A man stepped up to the Pyre, still holding a torch in his hand. “Miss Dorothy here is a witch.”

“I said release her, Frederick,” Isaacsaid.

The Knight advocating for my release was Isaac. A classic adventurer type that grew up with almost nothing but through determination, training, and stubbornness, he became a knight. Someone who would fight for justice and stick up for the common folks.

The other man couldn’t be more different. His name was Frederick and he was the corrupt townmaster who hated people like Isaac. His only goal in life was to emass as much power and wealth as he could by any means necessary. Apparently he found my very existence irksome and decided the best decision was to send a whole group of men to my cabin on the outskirts of town, attack me, drag me into center square, and kill me for being a witch.

I mean, he’s right. I am technically a witch. But still. Rude.

I glanced down at my feet and saw that the flames were rapidly spreading and I could feel the heat. The black smoke got thicker as the flames grew and the ash began to reach me.

“Stand down, Sir Isaac. You have no business here unless you want to stand by and watch this witch burn,” Frederick said with a cruel smile on his face.

Isaac pulled his sword and pointed the tip at Frederick.

“She is no witch,” Isaac said. “You are just a cruel man who wants to kill her to get to me.”

“Sir Isaac, I have no idea what you are going on about. I have no quarrel with you.”

“You do. You have a quarrel but you are too much of a sniveling rat to face me man to man. Instead you go after…after Dorothy,” Isaac said.

This silenced Frederick for a moment as the crowd of villagers began to murmur to one another.

“Enough Isaac. I am just here to bring justice to -”

“Justice? You know nothing of justice. Is that why you burn this innocent woman alive?” Isaac glanced over at me and then over to the flames.

“She is a witch,” Frederick said.

“Says who? Other than you? What proof do you have?” Isaac asked.

“I have been told many things about this woman and the black magic she practices,” Frederick said as he looked at me. “Truly the devil’s work.”

I struggled against the binding as the flames kissed my feet and I felt the intense heat.

“More lies!” Isaac yelled. “That’s the only thing that you can even utter. Lies upon lies.”

Isaac then turned toward the crowd.

“Our townmaster is sending an innocent woman to her death over pettiness. We have to stop him,” Isaac shouted but the group stood silent, avoiding eye contact.

Frederick let out a low laugh.

“You may be a so-called hero to these people, Isaac, but I am the one with the power here. I am in control. I’m the one cleansing the village of this evil,” Frederick said.

Isaac turned back to him with a look of intense anger I had never seen before.

“Release. Her,” Isaac growled as he took a step toward Frederick.

Frederick took a step back and two large men stepped forward to intercept Isaac. I recognized them as part of the group that attacked me.

“Now. Don’t do anything reckless that you’ll regret, Issac,” Frederick said. “No reason to throw your life away for this witch.”

Isaac glanced over at me once again and our eyes met. Tears welled up in my eyes as I looked at him, but I did my best to shake my head no. Even though I didn’t want to die, I knew that the man in front of me was too good for this world to throw away his life for mine. I was a witch and although I strongly disagreed with the black magic and devil nonsense Frederick said, I knew that this prejudice would hang over me for all time. Isaac on the other hand had a real chance to change the world and show everyone the hero he was always meant to be.

I closed my eyes as the smell of fire and smoke filled my nose and crept down into my lungs. I thought about the first time I met Isaac. My family were a group of traveling merchants who wandered from town to town selling bits and bobs. I remember I was a young child when we first made it to this town. My family set up in this very town square doing their best to sell their odds and ends as I ran through the streets causing whatever trouble I could.

I eventually found myself on this stone bridge and there was a boy about my age, staring down at the water.

“What are you doing?” I asked him.

I was not a shy child.

As we talked people would cross over the bridge and the water would show their reflection. However the reflections were exaggerated and funny looking. We would laugh and laugh at the reflections. I remember it was the most I had laughed in a very long time.

We spent the entire day together. He showed me the town and all his favorite spots to hang out. I remember that he loved watching people. Not in a voyeuristic way but in a way where he found everyone fascinating. Like he wanted to befriend all of them. He was kind and caring as we spent the day together even though I was basically a stranger. At the end of the day we made our way back toward the town square as my parents packed up for the day and got ready to leave.

“Here, I got this for you,” Isaac said as he held out a group of flowers.

They were a bit smashed and beant like he had quickly grabbed them from someone’s garden. Stolen flowers made them even sweeter in my eyes.

“Yeah sorry. My parents always travel and never stay in one place for very long,” I said. “But maybe we’ll see each other again.”

I let out a laugh.

“Thanks Isaac,” I said before leaning in and I gave him a kiss on his cheek.

Before he could react, I ran away with flowers in hand and joined my parents. As our wagon left town I waved at him.

It would be almost twenty years before I saw him again. This time I walked into the town as a fully grown adult and practiced with magical arts. I thought that Isaac may have forgotten about me or maybe he didn’t even live here. But as fate would have it, we met in the town’s central tavern.

We caught up and we learned about each other’s lives. He had joined the military and quickly made his way through the ranks. He became a knight and had taken up an oath to protect the people. I was purposely vague about my activities while traveling, but the entire time he gave me his full attention and I could tell he really cared. Looking into his eyes I could see the same boy that I met two decades ago.

Now a month later we reunited I stole a glance of his eyes one last time as the fire grew larger and larger. Minor magic enchantments held the fire at bay for a little bit but the smoke was thick and the heat was intense.

Through the smog I looked at him. Tears streamed down his face.

He then turned his attention back to Frederick.

“You are a sniveling rat that will die by my blade,” He said as he readjusted the grip of his hand on his sword. “But first I have someone I got to rescue.”

He dropped the blade and ran full force at me.

My eyes grew wide as he climbed the pyre and jumped through the flames.

I struggled against the bindings and tried my best to scream out at him.

“I’m going to get you out of here,” He said as I saw the flames burn across his back. “Just hold on a second.”

He shoved his full weight against the wood that I was tied to and I felt the whole thing give way. I slid down the pyre and we both ended up on the cobblestone of the town square. There were shouts from the villagers.

“Get them! Kill them!” Frederick yelled.

“Couldn’t let my true love burn to death,” He said without missing a beat.

I paused for a second before snapping back into attention at the sound of heavy footsteps making our way toward us.

“Trouble incoming,” I said as I got to my feet.

“Going to be hard to fight with just this,” He said as he gestured at his dagger.

“Try this,” I said as I waved my hands in the air and with a crackle of arcane energy, his sword reappeared in front of him.

“I know. I know. Just. Get us out of here and I’ll explain everything,” I said.

“Right,” He said with a nod as he put the dagger in his belt and picked up his sword.

We stood back to back preparing for Fredrick and his people.