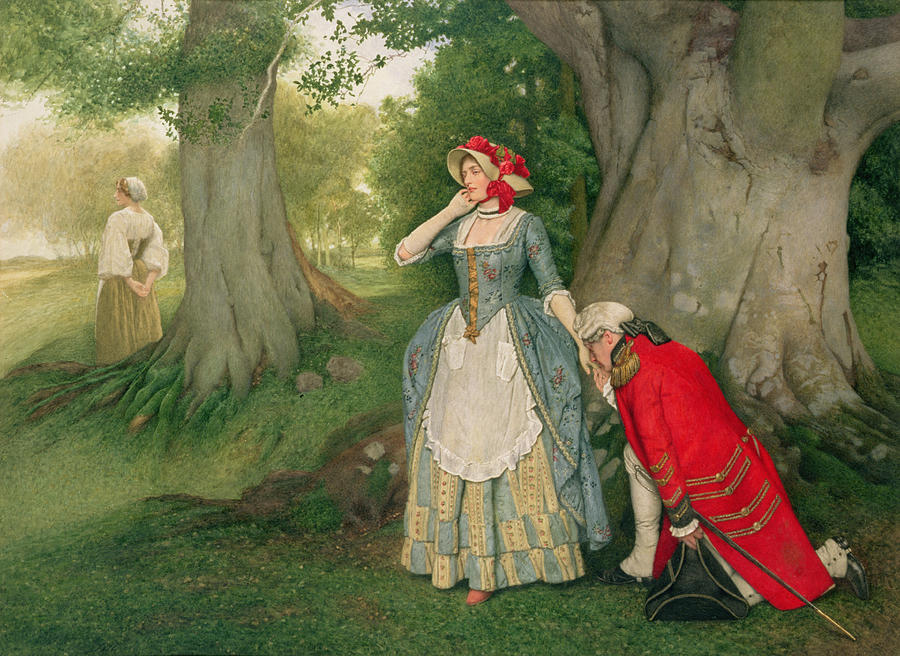 Date Night in the Park

Original Prompt: “What is your favorite work of art? What do you love about it?”

“Do you remember this place?” Jake asked squeezing Miranda’s hand.

Miranda squeezed back and smiled.

“Of course I remember this place. It was like our eighth date…maybe ninth,” She said.

“And I’m pretty sure you spent the entire date flirting with elderly women,” Miranda said with a laugh.

“I don’t remember that part.”

“Well I definitely do.”

“You’ve been inflicted with such an awful curse. How can you live your life like that?”

“Don’t worry, I put on my pants the same way everyone else does. Both legs at the same time,” Jake smiled.

Jake rolled his eyes and then wrapped his arms around her waist.

“You’re ridiculous and I love you,” Jake said with a kiss on her cheek.

“I love you too,” Miranda said with a laugh.

Miranda and Jake had been in a relationship now for almost two years. They had met in their Sophomore year in College through some mutual friends and they hit it off right away. There was a bit of awkwardness between the two, but it became extremely obvious to their mutual friends that this relationship was special. Miranda and Jake really cared about one another. They made each other laugh. They supported one another. They leaned on each other. There were fights and tears. There were arguments and breakdowns in communication, but at the end of the day, they loved each other and their love persevered.

Jake and Miranda had been on a variety of different dates both on and off campus. They ate ice cream under the stars. They went to a Mexican Restaurant where they had the most amazing waiter. They went an outdoor concert where they got authentic Mexican food from a food truck. They had study breaks in the library before stressful exams. They watched terrible movies and burnt popcorn. They could take the basics of each day and make them extraordinary memories.

One of the most memorable dates Jake and Miranda went on was a trip to the downtown museum where they had World War II photos and paintings. That had resulted in a kiss mirroring “V-J Day in Times Square.” It also left Jake with this feeling in his heart. In that moment he knew.

“So are we checking out more wartime propaganda or what?” Miranda asked pulling from Jake’s embrace.

“So boring!” Miranda gave him a playful nudge.

“You…actually did some research for this date, huh?”

“Most of it came from their website,” Jake admitted. “But I do study up from time to time.”

“What about the time where we drove out to that wildflower park to learn that those flowers bloom in April, not August?”

“Ok well maybe I’m not a perfect being. But we did kind of have the park to ourselves. And it was really nice,” Jake said.

They finally made their way into the lobby of the Museum and picked up a pamphlet. They walked through the Museum seeing both new exhibits and old ones.

They had been here every few months to see all the new things coming in and out of the museum. Some of their friends made fun of them for going to museums instead of going out to the club, but Miranda and Jake always had a blast checking out the art. There was just so many different art styles and exhibits that they always had something to talk about on their way back home.

Eventually Miranda and Jake made it to the main exhibit. It was the one Jake mentioned. The exhibit on Late Victorian Painters.

Miranda and Jake walked through the exhibit holding hands and looking at the paintings.

There was a whole variety of paintings in this exhibit. Lots of people in fancy dresses at fancy parties or royals dressed in their nicest clothes.

“I don’t know, Jake,” Miranda said. “I think this stuff is pretty boring. Just a bunch of rich white people living in England in their fancy clothes.”

“Yeah I guess that’s one way of looking at it,” Jake said.

“Well there’s a lot of history connected to all of it. I mean the Victorian Era was a huge era in England’s history and the art reflects that. Maybe the subject matter isn’t interesting, but the technique with water color and oil paints. Plus a lot of Victorian Era painters were fascinated with capturing the past in an ideal way and put a lot of detail into both nature and the peoples in the paintings,” Jake explained.

Miranda looked him up and down.

“How much Googling did you do before this date?” She asked.

“Ok, what’s so special about the painting?” She asked.

Jake began leading Miranda across the gallery as he talked.

“Well this particular painting is by Sir James Dromgole Linton who was a master at water coloring. He was knighted and even won the Jubilee Metal for his work as well as being a member and President of many royal institutes of painting,” Jake explained.

“Wow, impressive I guess,” Miranda said. “What about the painting.”

Jake lead Miranda over to a painting near the back of the gallery.

At the center of the painting was a woman in a blue dress with a red and tan bonnet on her head. There beside her was a man in a red coat kneeling down beside her. He was on bended knee. They stood in front of a background of trees and nature with another woman in the background to the left of the two people in the foreground.

“It looks nice I guess,” Miranda said studying the painting. “Lots of details.”

Miranda turned back but Jake was no longer standing beside her. Instead he was down on one knee. He held a black box in his hand with a diamond ring.

“Miranda, I love you so much. I love everything about you. I love the way you laugh at all my dumb jokes. I love that you are willing to go on adventures with me. I love that with you, everything feels so…natural. Like we’ve known each other for a lifetime.”

“Oh my gosh,” Miranda kept repeating as tears welled up in her eyes.

“These past two years, well almost two, have been the best years of my life and I can’t imagine spending those years with anyone else. You, Miranda, are my soul mate and I love you.”

“I love you too, Jake,” Miranda said with tears streaming down her face.

“Miranda, will you marry me?” Jake asked.

Jake let out a sigh of relief.

“Let me get the ring on you at least,” Jake let out a laugh.

“Oh, right, the ring, the ring,” Miranda drew back and stuck out her left land.

Jake pulled the ring from the box and slipped it onto Miranda’s ring finger.

When Jake and Miranda first made the trek out to the museum in the snow to look at World War Two images and art, Jake was unsure where this relationship was going. But after that date to the Art Museum, he knew. He was in love with Miranda and she was in love with him. It was after that date where he just laid in bed smiling. Just smiling. He couldn’t get her face out of his mind and he loved it. He wanted to wake up every morning seeing that smile. He wanted to go to bed every night seeing that smile. He wanted to spend every single day of his life with her.

“I love you Miranda,” Jake hugged Miranda and held her tightly against him.

“I love you too, Jake,” Miranda hugged back and buried her face into his chest.

There they stood for a moment embracing one another with “The Proposal” by Sir James Dromgole Linton as their backdrop.

Header Photo Credit to Sir James Dromgole Linton for his painting of “The Proposal.”
https://fineartamerica.com/featured/the-proposal-sir-james-dromgole-linton.html