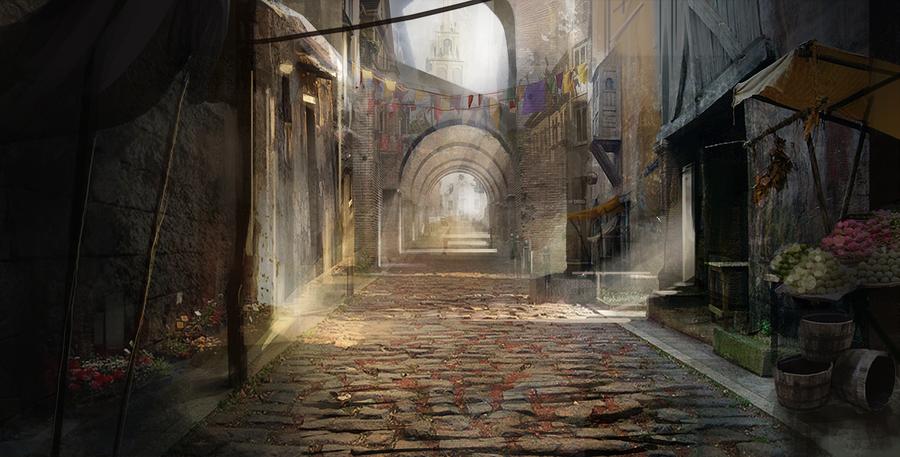 The group of Sigthyme, Juniper, Tak, and Grace walked away from The Titan’s League toward the center of the city. Both Sigthyme and Tak were now members of The Titan’s League after a messy trial and gained a bit of notoriety here in Xylon. They hoped that this would be enough to allow them to go to the crime scene where Riffen was last and investigate his kidnapping. Even though the group had a plan, things had gotten more complicated. During the trial, Tak had unleashed a blast of dark energy he blamed on the leviathan tattoo across his back. Grace had also revealed a secret to Juniper. Grace had developed large, black wings she was able to summon due to her strange origins. Plus there was the fact that The Chief of The City Guard told them to specifically not investigate Riffen’s kidnapping. A lot of things complicating the situation.

But the group was determined. They could not just sit back and just let Riffen’s fate be left up to the city guard. They had to take action.

Sigthyme and Tak took the lead as the four of them walked across town and made their way toward the crime scene. They didn’t know exactly where they were going, but Sigthyme was able to ask around town and find a general location. When they stumbled upon an alleyway with several members of city guard members, Sigthyme knew they had found the right spot.

“Hello Ladies and Gentleman,” Sigthyme said. “Don’t worry. We are here for assistance.”

“Who are you?” He said as he placed a hand on the hilt of his blade.

“Of course. You haven’t heard of us yet. My mistake. My name is Sigthyme and here is my buddy, Tak. We are new members of The Titan’s League and we believe we may have a stake in this crime scene.”

The City Guard raised his eyebrow.

“The Titan’s League? What business do monster hunters have with this?”

“It’s a bit complicated,” Sigthyme said as he tried to side-step the guard, but the guard moved to block him.

“I’m sorry but I can’t let you in here without permission from The Chief,” The guard said. “Plus we already have -”

Before he could finish his sentence two individuals stepped out of the building into the alleyway and there was a screech of excitement.

“Our friends are here!”

“-Robinhearts,” The guard finished with a sigh.

Standing in the alleyway were two members of The Robinhearts that Tak and Juniper had met a couple days before, Mara and Sauler. Mara was still dressed in a variety of colors but she wore her Robinheart uniform with brass armor and a red breastplate. Her brother Sauler was still dressed in dark clothing but had matching armor.

“Best friends! Best friends!” Mara waved her arms as she skipped quickly toward the group.

“Oh..uh… Mara,” Juniper tried her best to put on a happy face.

“Right! Juniper, Tak, and other friends,” Mara said. “What are all of you doing here?”

“We came to investigate the crime scene,” Juniper said.

“What? No way! Me too! Me and my brother are helping out the city guard people. Apparently someone is missing,” Mara said.

“Our friend, Riffen. He got kidnapped by a man named Krumb.”

“Oh, right. Krumb. He is a seriously bad dude. The Robinhearts have been taking out his people for awhile. The monk who attacked you was probably one of his people,” Mara said.

“Could we possibly get in there and look around?” Sigthyme asked.

Mara turned to look at him.

“Woah. Hold on. This is an official investigation under the jurisdiction of The City Guard. We just can’t let strangers walk into the crime scene,” The City Guard member said.

“Please. They are my friends and it’s really important that they are allowed into the crime scene,” Mara said.

As she spoke, her voice seemed to be sweeter and there was a tinge of magic which Sigthyme recognized. The guard’s eyes glazed over and then he nodded.

“You and your friends may enter the crime scene,” The guard said.

“Yay! Yay! Yay!” Mara jumped up and down in excitement before grabbing Juniper’s hand and she pulled Juniper forward. “Let’s go!”

The group made their way past the guard and down the alleyway.

“How did you do that?” Juniper asked.

“Oh, I just have a way with people,” Mara said with a laugh.

“And a magical gift,” Sigthyme added.

Mara just gave him a wink.

“Mara, what are you doing?” Sauler asked as he leaned against the building. “Who are these people?”

“Sauler! You know them. This is Juniper and Tak. We saved them from the monk,” Mara said.

“Right,” Sauler said. “And what are they doing here?”

“Our friend, Riffen is missing,” Juniper spoke up. “He was kidnapped by Krumb and this was the last place we knew he was. We need to find clues.”

Sauler gave her an intense look.

“This place has been looked over by members of The City Guard, The Pact of Thorns, and The Robinhearts. I don’t some friends will find something we didn’t find,” Sauler said.

“Tak and I are actually new members of The Titan’s League,” Sigthyme said.

“There’s no monsters in there to hunt or people who want to hear old fables of glory,” He said. “But fine. Have a look. Just don’t make a mess of the place.”

Sauler just shrugged and walked away to go talk to the city guard.

“Oh, don’t mind. Sauler. He’s always a bit…grumpy. But deep down he is a softie. You just have to spend some time with him,” Mara said.

“He is super cool,” Mara smiled.

“Well, let’s get in there and look around,” Sigthyme said.

“Of course, let me show you the way!” Mara said as she skipped inside.

Mara lead the group through the doorway and into Krumb’s former hideout. They were surprised to see that the room was already a mess. There was an overturned table and splinters of a wooden chair, cold ash and coals on the floor, and signs of a struggle as well as trails of blood.

“Yeah it’s a bit messy,” Mara said. “We tried not to move anything around.”

“Is that blood?” Grace asked.

“Yeah some sort of fight definitely broke out, but we can’t really tell whose blood is whose.”

“Do you think Riffen is alright?” Grace asked Juniper.

“Of course. He has to be alright,” Juniper replied.

“The guards didn’t find any bodies. Plus this is a pretty minor bit of blood. Dead people bleed a lot,” Mara said.

The group looked at her, not saying anything.

“Yeah, sorry. Your friend was here. Well I think he’s still alive, so that’s a good thing,” Mara said with a weak smile.

“We can look around, right?” Sightyme asked.

“Of course! Just don’t mess with stuff. Still an active crime scene,” Mara said. “I will be just outside talking to the guards and my brother, making sure nobody bothers you.”

“Thanks Mara,” Juniper said and Mara skipped away leaving the group to investigate.

“I can’t believe Riffen was here. All by himself with that Krumb guy,” Grace said.

“It looks like Riffen put up quite a fight by himself,” Sigthyme said. “Plus he was able to leave the ring for us to find. He has to be out there somewhere trying to come up with a plan to escape.”

Grace walked over to the dormant fireplace and poked at a few clumps of ash with the tip of her dagger.

“What exactly are we trying to look for?” Grace asked.

“Well, I guess we are looking for any clues that were left behind that could indicate where Riffen is now or where Krumb is taking him,” Juniper said.

Sigthyme tiptoed around the room examining the smashed up furniture.

“If he did that, Krumb would likely find himself face to face with the military in Augendale,” Juniper said.

“Well there are only a couple major roads of of Xylon. One to the North takes you back toward Augendale, the one to the South takes you to the coast, and the Eastern one takes you toward the center part of the country,” Sigthyme said.

“Or he could still be in the city,” Grace said. “If Krumb had one hideout, he might have multiple others.”

“He really could be anywhere,” Juniper said as she kicked a small splinter of wood across the room.

“Riffen strong,” Tak said as he stood near the doorway.

“We will find him, Juniper,” Sightyme said. “Remember that there are a lot of people trying to track down Riffen.”

“But what can we do?” Juniper asked.

“Well we are here, right? Now we just need to find something in this mess,” Sigthyme said.

Grace made her way around the edge of the room, knocking on wood and poking at the stone floor, seemingly at random.

“Grace, what are you doing?” Juniper asked.

“I have a little bit of knowledge about places like this. Maybe I can find something,” Grace said as she continued to poke and prod.

Juniper and Sigthyme made eye contact, but Juniper just shrugged.

“Hey, Tak. Come here,” Grace said and Tak walked over to her.

“What did you find?” Juniper asked.

Tak reached up and wrapped his hands around the lantern. He pulled on the chain and there was a clicking sound. Across the room, behind the overturned table, there was another series of clicking sounds as the stone wall slid back and opened, revealing a dark passageway.

“Woah,” Sigthyme was in awe.

“Uh friends!” They heard Mara’s voice outside and a large amount of footsteps.

“We are in trouble,” Sigthyme said as he noticed The Chief’s angry expression.

2 thoughts on “An Informal Investigation (D&D)”