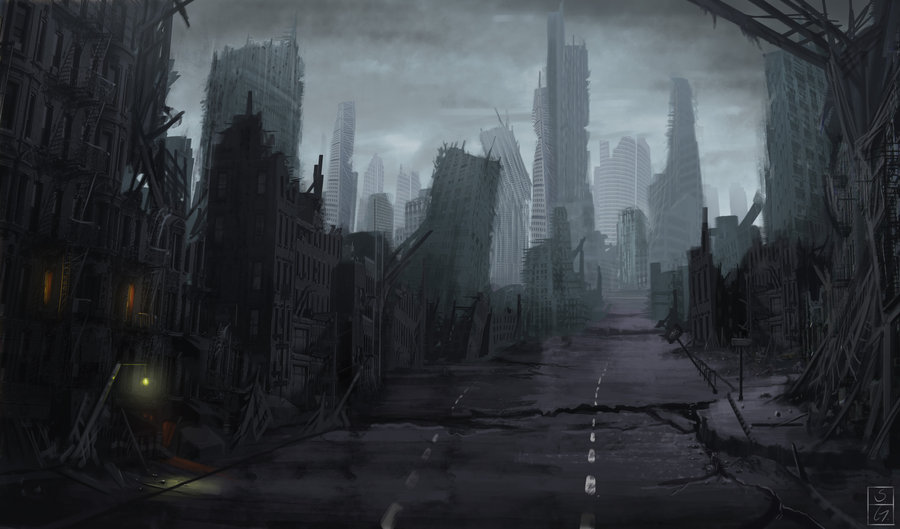 Original Prompt: “Humans once wielded formidable magical power but with over 7 billion of us on the planet now Mana has spread far to thinly to have any effect. When hostile aliens reduces humanity to a mere fraction the survivors discover an old power has begun to reawaken once again.”

The darkened clouds hung above the city. Heavy rain continued to fall upon the desolate city. What once was a sprawling metropolis, was now an abandoned corpse of human history. A catacombs to the last little bit of human life.

It was an epicenter of disease and human extinction when the Travelers made contact. First they came from the stars in their large, metallic spaceships. Then, before humans could ban together to fight the travelers, they sent down clouds of poison upon the world. Highly contagious disease wiped through humanity before they could find an immunity. Billions of people died in the first wave.

Then the Travelers came down in their mech-suits and made waste to the survivors. People unaffected by the alien disease were then gunned down in the streets. Small groups of humans tried their best to fight back against the Travelers, but fell quickly. Resistance was useless.

In the moments after, the few humans left around the world began gaining new abilities. Some gained elemental powers of summoning fire, lightning, wind, water, and earth. Others gained the ability of telekinesis or telepathy. Others still gained the power to sense other users of these abilities. All of this came from humans gaining the power to use mana to tap into magical abilities. Abilities that could help the humans fight against the Travelers or at least survive for a little bit longer.

The rain continued to fall as a flash of lightning streaked above the sky. The light reflected off the shiny, metallic surface of the Traveler ship hanging above the destroyed city. Below the ship were two magic users hiding from the ship in a small, partially-destroyed building. They popped their heads out of the doorway to survey the area.

“I’m not sure,” Liam said looking out into the darkness.

In front of them was a large crater in the middle of the road which was quickly filling with water. Across the way was some kind of magic user stuck in a bear trap.

Liam knew all of this because he had lived this moment before. He had been in this exact situation with Ashley before. He had seen the whole thing unfold. Liam and Ashley tried to run, but got killed by the Traveler ship after the Travelers were alerted to their spot due to the third magic user.

The man yelled out from the darkness.

“We need to shut him up,” Ashley muttered. “He’s going to get us killed.”

Liam had informed Ashley about the failed escape attempt resulting in their death and the miracle of Liam being able to rewind time to get back to this moment. Liam wasn’t sure he could pull of such a miracle again. He was given a second chance and he wasn’t going to squander it. He need to make sure Ashley got out of here alive. Liam’s life was a second priority.

“We tried running. That didn’t get us anywhere,” Liam said.

“So do we go out and rescue him or just try running a different direction?” Ashley asked.

Any attempt at rescuing the other magic user was dangerous and could get them all killed. Plus who knew if this guy could be trusted.

Ashley had tried using her powers to read the man, but he was somehow capable of blocking her powers. Someone with that power set was not to be trusted.

At the same time, they had tried running last time. That got them killed.

Liam knew that they didn’t have much time and he needed to make a decision.

Ashley looked up at Liam, “What are you thinking?”

Liam took a deep breath and let out a sigh.

“Rescuing the man out there in the darkness is risky, but I think it might be our best offer. Running seems like we would just be making a mistake,” Liam said.

“We could just hide out in here,” Ashley suggested.

“The Traveler ship has a powerful laser weapon. It will destroy the whole block. We can’t stay here,” Liam said.

Ashley let out a small sigh.

“Fine. I guess we have to go after the stranger.”

The man yelled out again.

Liam looked up into the sky. He knew there was a large, Traveler ship was hanging above the city among the large, dark storm clouds moving into position above them. Soon it would destroy the whole city block.

“How much time do we have?” Ashley asked.

“Not much,” Liam muttered.

“Then we need to stop wasting time. Let’s go get him,” Ashley said stepping out of the doorway and into the rain.

“Wait,” Liam grabbed her hand and brought her back in to him.

After a couple seconds, Ashley broke off the kiss.

“What was that for?” Ashley asked with a smile.

Liam hesitated in the doorway.

“Maybe you should just fly away. I’ll get the guy and meet you in a safe place.”

“No. We’re doing this together. I’m not abandoning you.”

Ashley cut him off.

Liam knew it was useless. Sometimes Liam was the stern one and sometimes it was Ashley. In this moment, Liam knew he could not change Ashley’s mind. They were going together.

They both made their way out into the rain. Liam ignited his hands in balls of flame to give them some light.

The man continued to scream for help as Liam and Ashley made their way around the large, crater towards the man.

A flash of lightning lit up the sky and both Liam and Ashley could see the Traveler ship up above.

Liam lead the Ashley towards the man using his flames as a light source moving forward. As they approached the man stopped screaming and instead began speaking to them.

“We’re not angels,” Ashley muttered keeping her distance from the man.

Waving his flaming hands over the man, they could see that one of the man’s legs was stuck in a large, rusty bear trap. His leg was bloody and mangled. Liam assumed that he had lost a lot of blood.

“I think he’s harmless in this state, Ash,” Liam said. “Let’s get him free and then find cover.”

She approached the man’s head while Liam stayed at his feet.

“Quiet,” Ashley said kneeling down to the man.

The man reached out and grabbed hold of Ashley’s hands.

Liam looked over the man’s leg. He was pretty sure he could use his flames to melt the bear trap. And cauterize the wounds.

“Find something for him to bite down on,” Liam told Ashley.

Ashley glanced around not sure what to look for.

Liam extinguished his hands for a moment. He removed his leather belt and tossed it to Ashley. It fell into the mud with a splash. Then he reignited his hands.

She placed the belt in the man’s mouth who was still mumbling.

He brought down the fire upon the man’s leg and the bear trap. The man started squealing as he bit down on the belt. He flailed a little bit as the flames touched his skin. Steam and smoke rose up from around the flesh. It smelled like burning flesh. A scent Liam had experienced many times.

The man’s screams were partially obscured, but it not completely. His voice still echoed out into the rainy city.

Up from above a green light shined down lighting up the night. Both Ashley and Liam looked up at the source. It was the Traveler ship.

The man fell quiet and passed out in the mud.

“Grab him and fly to cover,” Liam yelled to Ashley.

“I’m not leaving you,” Ashley argued.

Ashley stood there for a moment. She wanted to argue, but Liam seemed determined. Plus his voice had a sense of urgency that she rarely heard.

Ashley nodded and picked up the man. One leg was just a burnt stump stopping halfway between his knee and what would have been his ankle. Part of it was still steaming in the night.

She took a deep breath and lifted the man’s weight onto her. She wrapped his arm around her shoulder.

She launched herself into the air and there was a large burst of wind behind her followed by a whirlwind of rain and mud. They disappeared out of the green light and out of Liam’s field of vision.

Liam then turned towards the source of the green light. He looked up and saw the Traveler ship was almost directly above him.

“You want this!? Come and get it!” Liam yelled out at the Traveler ship.

He clenched his hands into fists and the fire around it grew larger and larger.

He raised his hands into the sky and unleashed torrents of flames into the air. The flames were so large and bright, that he no longer saw the Traveler ship. It was just a variety of reds, oranges, and yellows blocking his entire view.

The flames flew higher and higher as they were fueled by Liam and his magical abilities until the whole area around Liam was nothing but fire. Even the soaked land around him became hot and steamy until nearby patches of dirt caught fire.

Liam almost lost himself in all the flames. He was nothing but a fireball. He did not feel the heat or see the light. His vision was white.

And then it was blackness.

He blinked his eyes open. He was laying on some kind of mattress. His whole body felt heavy.

“What happened?” He groaned as he tried to lift himself.

Ashley placed a hand on his chest making sure he didn’t get up.

“You’ve been passed out for a few days,” Ashley said with a worried look.

“Don’t worry, Warwick has been helping me take care of you,” Ashley said.

Liam sat up with Ashley’s assistance.

“He went out to find something to eat,” Ashley said. “We’ve been scavenging some canned goods from a nearby doomsday bunker. Apparently whoever built the bunker also set up some traps. Including the bear trap that took Warwick’s leg.”

“I think I took Warwick’s leg,” Liam said with a small cough.

“Well, either way,” Ashley said. “He’s been helpful after we set down some ground rules.”

“Like that I would kill him if he did any suspicious,” Ashley said.

Liam and Ashley both turned towards the doorway of the building. There standing in the doorway was a man with a sack in one hand and a make-shift crutch in the other. He hobbled forward using the crutch for stability.

“Hello Liam. My name is Warwick. Thanks for saving my life.”

Prompt submitted to r/WritingPrompts by u/Lorix_In_Oz

One thought on “Humanities Only Hope (Part 2)”