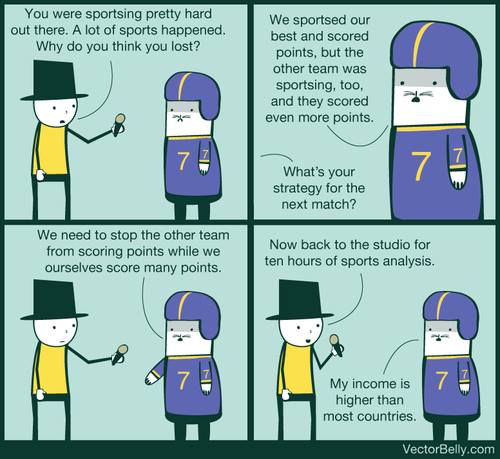 Well today is the big day! The day that all Americans sit down in front of the big screen TV with beer in one hand and chicken wing in the other. We watch the world championship of a sport that’s played almost entirely by America (although the NFL is trying to get interest from countries all over the world), and we actually look forward to watching ads instead of using an add blocker. It’s the Superbowl or “The Big Game” which is what it’s called when you don’t have the rights to the NFL trademark. Of course there is also Superb Owl Sunday which is the celebration of some pretty great owls and it just happens to be today as well. Strange coincidence I’m sure. Maybe some of you are out there preparing to watch The Puppy Bowl which is probably the only reason why people watch Animal Planet anymore. Either way today is like a national holiday for people who like to watch Sports Ball or what some select people call “football” (not fútbol).

Now for me, I don’t watch a whole bunch of sports, but football is probably the sport I watch the most. I’m not a baseball fan or basketball fan. I rarely get to watch soccer or hockey or jousting because of the lack of TV channels I have at home (and the fact that it’s not 16th Century England), so football is the default sport to watch. I root for my College Alma Matter when it comes to college football and when it comes to the NFL, I root for one of those teams that are lucky to get a win a season! (Don’t worry there’s always next season…or next season…or ten seasons from now.) So going into this Super Bowl, who am I rooting for?  I’m joining the crowd that hates on the New England Patriots (Football Team), Tom Brady (Quarterback), and Bill Belichick (Coach). This Super Bowl I’m rooting for the Atlanta Falcons!

The main thing I’m hoping for today is that there is a great football game and it’s not a blowout like a few games have been in the past. Sure I want “my team” to win, but I’d rather watch a close game over a one-sided slug fest. I’m a guy who roots for the offense over the defense so I would be ok with a final score of 56 – 49 or something like that. Far better than a 3 – 0 shutout (That’s the score of a good soccer game). Today is also supposed to be about coming together with friends and family and yell at a TV for three hours while you have buffalo or barbecue sauce on the edges of your mouth. So no matter what you’re doing today whether it is watching the big game, the puppy bowl, or watching literally anything else, I hope you have a great day full of great company and great food. I’m sure we’ll get some great commercials and even greater memes out of the game and that’s all we can really ask for.

Hope you have a wonderful Superbowl Sunday and a fantastic week!